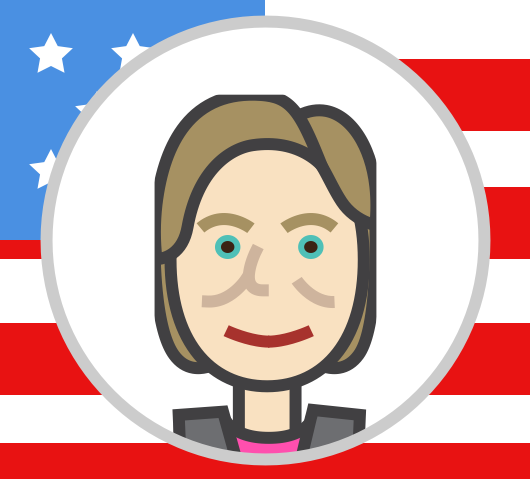 What if you had only one product? Not one line of products, but one single item that had to be sold by November 8th or it would be valueless in the market. That level of intensity would truly focus your content marketing efforts.

Thanks the current presidential election, you can gain that intensity for your next marketing campaign and gain important insights into the latest motivational techniques. Let's start by taking a closer look at the marketing strategy of someone whose very professional life depends on it: presidential candidate Hillary Clinton.

Political campaigns are valuable testing grounds for marketers for three reasons: the time lock, the high motivation bar and the binary results. Time lock is a term borrowed from screenwriting, where pressure mounts as time runs out. The high motivation bar means that political marketing has to inspire people to leave their homes and vote rather than just click a button. Finally, binary results refers to the fact that the number two position in most industry vertical tends to be a very good position, while coming in second in a political race is a total failure.

While President Obama has been called "the first president of the social media age," this year's candidates are seeking to do more with all the digital platform available. They are taking multi-channel messaging to a new level. The following is an introduction to the key elements of the Clinton approach.

The Voter Persona and the Data "Sweet Spot"

The Benenson Strategy Group (BSG) led the digital marketing efforts for Obama's successful campaigns in 2008 and 2012. Now BSG principal Joel Benenson is plotting a similar strategic course for Clinton. After her loss to Obama in the 2008 primaries, Clinton's marketing team determined that average voters perceived her as "inauthentic." As a result, BSG has crafted, and continually updates, a voter persona based on a unique recipe of voter data sources. They combine big data in the form of aggregate characteristics from national averages with "small data," which includes diaries from representative voters and customized focus group interviews.

Benenson explained, "There's a real need today to find that sweet spot between big data and small data - and I believe most companies aren't doing that well enough yet. If you think about the big data we have, it's all backwards-looking and behavior-oriented, which is very valuable in some ways. But how do you communicate with that audience, what message keeps them loyal and how do you strengthen the bond with them? All the behavioral data in the world looking backwards won't answer that question."

A Multiplicity of Platforms

An investigation into the digital marketing platforms used found that Clinton lead all the other candidates in the diversity of her digital advertising buys. While Trump led the Republican candidates with a portfolio of seven ad networks and retargeting platforms, Clinton went further with nine, including her team's controversial AOL buy. The AOL investment was mocked by comedians as being outdated, but the resulting free media coverage nearly doubled her impressions with preferred audiences. For her email marketing automation, Clinton chose Mandrill from MailChimp, MailGun's RESTful APIs from RackSpace and mobile engagement tactics from Silverpop. Perhaps it's a bit ironic that although Clinton is facing investigations into the security of her email usage, her team has made effective use of the latest email marketing platforms.

Corporate strategist Peter Sealey expressed the power of Clinton's logo by saying, "It's exactly the same as selling an iPhone or a soft drink or a cereal. She needs to use everything a brand has: a dominant color, a logo, a symbol. . . . The symbol of a Mercedes is a three-pointed star. The symbol of Coca-Cola is the contour bottle. The symbol of McDonald's is the golden arches. What is Clinton's symbol? If you can get her promise down to one word, that's the key." Her logo started with a bold sans-serif H and then took a clue from the FedEx logo, adding a progressive forward arrow.

Steven Heller, winner of the Smithsonian National Design Award, chose it as the best of the candidate logos, waxing philosophic, "It embodies all the best qualities of the Obama 'O,' yet goes to another symbolic level: The future lies ahead, and H (Hillary) will take the country forward. An even deeper read of the arrow smashing through the vertical stroke of the H suggests that her presidency will break down barriers." However, it also drew a great deal of criticism. American Institute of Graphic Arts gold medalist David Carson wrote, "The first response I have is: Hospital on the right, got it. It feels distant, cold, non-inviting and possibly too much like the perception of the candidate herself." Perhaps what matters most is the number of people discussing it, regardless of how they feel about the logo. As has been the case with famous recent corporate logo changes like Uber.

The Medium vs. the Message

That may also be the biggest lesson that the Clinton marketing teams has taken from Trump's marketing. It's a variation on the old saying, "There's no such thing as bad publicity." One recent analysis of the correlation data revealed that Trump has achieved a 3X better poll lift from negative coverage on Twitter than he does from positive coverage. That's an impressive achievement no matter how you slice the data. In any case, expect to see remarkable changes to the marketing strategies of the remaining candidates in the wake of the Republican and Democratic conventions. That's when the time lock, the motivation bar and binary results will begin to exert their most intense pressure.

Be sure to check out the strategies of competitors Donald Trump, Ted Cruz, and Bernie Sanders to get an in-depth look at the content marketing strategies which shaped this election.

Looking to improve your own content marketing strategy. Be sure to follow our blog to get all the latest industry updates, or use our Content Planner tool to develop a plan of your own.