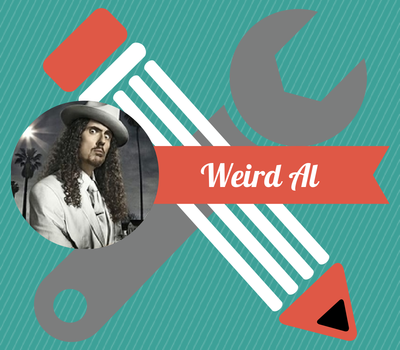 
Musician-parodist artist "Weird Al" Yankovich has taken a unique approach to marketing his new album, "Mandatory Fun." The fun began in mid-June with Weird Al releasing a cryptic message hinting at the album's release date. Starting on July 14, the fun continued by kicking off the start of a week of daily music video releases to accompany the album release.

The word "less" is often overused when describing nouns, while ignoring its counterpart fewer. Al reminds us that "less" goes with mass nouns, such as money, food, or time. "Fewer" is suited to discuss count nouns like bottles, shoes, or cats.

Incorrect: I have less shoes than her.

Correct: I have fewer shoes than her.

2. I Could Care Less

As Weird Al puts this ever-so-eloquently: "...Like I could care less / That means you do care / At least a little." If it's possible for you to care less than you currently do, that means that you care to a certain extent, regardless of how little it may be.

Ordering coffee without being judged by the barista is hard enough already for all the casual coffee drinkers out there. The least casual coffee-cravers can do is correctly pronounce the name of their drink. It's "Espresso," with the letter "s." Quoting Mr. Yankovich, "No X in espresso."

We've all encountered that true grammar fanatic who corrects the usage of "who" to "whom." Weird Al's new song reviews the correct usage of who vs. whom in terms of possession. To distinguish between whether you should use who or whom in other situations, just test by answering the question you're asking.

A: Who/whom is the host of the party?

B: Who/whom will you vote for?

Weird Al illustrates the difference between "doing good" or "doing well" with a humble chalk drawing in his video.

If you tell someone you're "doing good," that would involve you partaking in actions that improve a situation, like if you were saving a kitten from a tree. Going a step further, "doing good" is grammatically incorrect since "good" is an adjective, not an adverb. You can't be doing an adjective.

"Doing well," however, is usually what people mean when they say they're doing good. "Doing well" is a response that indicates you've been in satisfactory condition.

6. Irony is Not Coincidence

An example of an ironic situation would be a firetruck catching on fire or a traffic cop getting a ticket. Real life irony generally involves a role reversal, like those two examples. People often mistake a coincidence for irony. If it were to rain on someone's wedding day, this wouldn't be an example of irony. It would just be an unfortunate coincidence.

In terms of commercial success, Weird Al is having a pretty great week since each of his videos this week easily exceeded a million views on YouTube. In terms of making the world a more grammatically correct place, "Word Crimes" is having an even better week having taught basic and intricate grammatical principles to over 6.2 million people already.

To Read More About Content and Writing, See Below:

Published by JD Peterson on Friday, July 18, 2014 in Content Marketing.