How Bernie Sanders' Content Strategy Made Millennials Feel the Bern 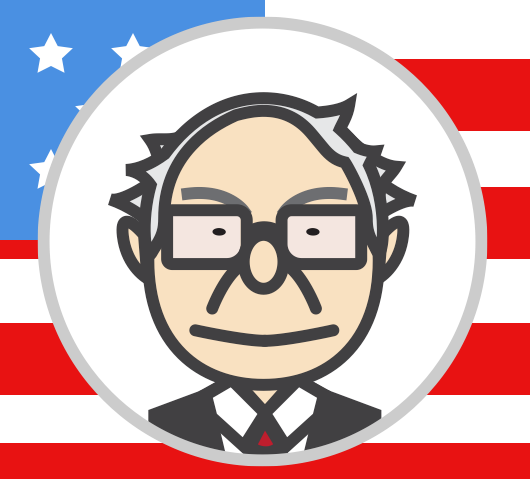 It's no secret Bernie Sanders has won the hearts of young voters. But how does he do it? In essence, Sanders' marketing team found the right channels to reach their target audience and developed a brand that speaks to the core values and concerns of millennials.

Through social media, an authentic-seeming persona and a strong emotional appeal that resonates deeply with younger voters, Bernie Sanders has become the favorite candidate among 18 to 35-year-old voters, taking in 71% of their votes.


Social media is a quintessential part of the millennial lifestyle. In fact, a study from the Pew Research Center found that over 84 percent of this demographic are users of social media. Of that, 70 percent use Facebook at least once daily, and 43 percent use the website multiple times a day.

While Donald Trump's Facebook following, at 7.7 million, is nearly double that of Sanders' and Clinton's, his rate of growth has slowed down tremendously, while the others' continues to grow. Sanders is picking up where Trump drops the ball, though, primarily due to the fact that supporters perceive him as more authentic and sincere. Because of the trust they have in him, Sanders' supporters tend to share, re-tweet and create their own content for him at greater frequencies than for any other candidate, giving him a larger overall reach.

The social media arm extends well beyond Facebook, however. Of the democratic candidates, Sanders has the highest number of Instagram followers, with 1.3 million, compared to Hillary Clinton, who has 1.1 million followers. Again, Trump leads the way in numbers, but Sanders and Clinton defeat him in growth. What's more, Sanders beats all with the most shares and likes.

On Twitter, Sanders' hashtag, #feelthebern, is tweeted over 2,000 times per hour, while Trump's #Trump2016 hashtag receives 729 tweets per hour, and Clinton's #imwithher hashtag is tweeted 425 times each hour. This shows exactly how much momentum and enthusiasm stems from young voters, who comprise the vast majority of social media users.

How He Does It


The Bernie Sanders campaign is certainly very attractive to millennials. Just consider the fact that in the Wisconsin primary, Sanders received 82 percent of votes from people under 30. But what is it about his image that attracts so many young supporters? This is due in part to his reputation of being sincere, consistent, authentic and relatable. These attributes are far removed for young people's standard perception of crooked and corrupt politicians. His marketing demonstrates his value to young voters.

Throughout his career, Sanders' voting record shows that he has always supported the same measures in topics millennials find important, such as LGBT and minority group rights. The same cannot be said for other candidates, like Clinton, who many believe has changed positions on topics like gay marriage. The Sanders' campaign emphasizes his consistency by incorporating video clips and quotes from previous speeches into commercials and other marketing materials to demonstrate that his viewpoint has not shifted. His delivery is always passionate, his tone rich with inflection and his mannerisms reflect his emotion. Something which consistently appeals to today's young voters.

Millennials view Bernie Sanders as relatable. He's a real person with disheveled hair and slightly ill-fitting suits. He even flies coach. Unlike the poised and pristine Hillary Clinton, who has a reputation of being frigid, Sanders is representative of how many millennials see themselves at the moment -- a bit of a mess but with strong convictions and aspirations for a better tomorrow. By addressing the socioeconomic disparities, the problems with the status quo and social tensions, Sanders shows that he is on their level. The issues they find important, his campaign emphasizes, leave a greater and more relatable impression. Through his consistent voting record over the years, as seen here and here, Sanders has also shown that he is a break from the norm, and is someone who millennials can trust to speak out on their behalf. Sanders' marketing team has done a good job of highlighting this.

Millennials Are Driving the Bus


With 86 million and counting, millennials now comprise the largest voting block in the United States. By 2020, that number will have grown to 40 percent of voters. Issues that are important to this generation include climate change; income disparity; escaping student debt; the corruption and greed of large corporations, bankers and Wall Street; and putting an end to the power of lobbyists. These topics are also highly emphasized by the Bernie Sanders campaign. Bernie Sanders, as a brand, is reaching all the sweet spots of this generation, which, in turn, is propelling his popularity further.

As the most socially connected generation, millennials are able to harness their excitement for a like-minded candidate by sharing his message among peers and other contacts, thus doing the campaign marketing for him. This is an example of grassroots marketing at its finest. These voters are receiving a message that they sympathize with, and are providing more momentum by driving these ideals forward at a greater rate than any campaign could do on its own.


Bernie Sanders' presidential campaign successfully reached and inspired millennials through social media presence, grassroots marketing and his personal image. By using social media as a center-point of marketing, his campaign was able to reach young voters where they already are -- on their terms and on their level. While the democratic nomination may be a lock for Hilary Clinton at this point, Bernie has vowed to fight to the end, further solidifying supporter from millennials who he promised he wouldn't quit on.

Be sure to check out the strategies of competitors Donald Trump, Ted Cruz, and Hilary Clinton to get an in-depth look at the content marketing strategies which shaped this election.

This piece was written by a Scripted writer. If you are looking to outsource your content creation, be sure to check out some of our amazing writers below.