So: vermouth. Maybe you've heard of this stuff in passing, as part of a laundry list of ingredients for some old-timey cocktail. Maybe you have a bottle at home, somewhere, behind the creme de menthe, next to the Chambord? How long has it been there? No one remembers. Let's start with the basics. Vermouth is a fortified and aromatized wine. Basically: wine spiked with brandy, infused with herbs and spices, and sweetened. There are two main varieties: red (sweet) vermouth, which originally hails from Italy, and white (dry) vermouth, which first appeared in France. Vermouth, like amaro, was originally marketed for medicinal purposes. It then went on to became a celebrated aperitif, served on its own or with a twist of citrus. Eventually, vermouth found its permanent home at the world's bar when it became associated with some of history's most iconic cocktails. The Essential Mixer If you've ever had a Martini or a Manhattan, then you've tasted the herbal goodness of vermouth. A Martini uses dry vermouth, and a Manhattan is served with - you guessed it - the sweeter sister. The exact amount in each cocktail can vary from a few drops to a half-ounce, depending on the bartender and your taste. You can indicate your preference for less vermouth-ness in a Martini by calling for "Dry" or "Extra Dry" - though some will argue that an Extra Dry Martini should contain no vermouth whatsoever (as Winston Churchill famously noted), but then you're really just drinking chilled gin. Not that there's anything wrong with that - it just isn't a Martini. Power drinker bonus: When you come across a "Perfect Manhattan," that doesn't mean it's the world's best. It just means that it contains both sweet and dry vermouth. Other standard vermouthified cocktails include the Negroni, the Gibson, and the recently re-popularized Brooklyn. So the next question is: which vermouth to buy? Big Name Brands With History Not all vermouths are created equal. As with whiskey or gin, the quality of your vermouth makes a big difference. Some of the brands you'll come across often in the states include Martini & Rossi, Dolin, and Cinzano, but let's talk for a moment about one in particular: Noilly Prat. There was a long period in which the United States drank a dry Noilly Prat that was entirely different from everywhere else in the world. The U.S. recipe was simpler, lighter, and a lot less flavorful. Why? Maybe because Americans had tossed off the herbaceous gin Martini for the sleek and sexy 007 version, made with crystal-clean vodka. When Noilly Prat brought its original recipe back to the U.S., it didn't do so well. The Yanks had grown accustomed to olive-laden Martinis that kept vermouth far in the background. Today, both of Noilly Prat's dry recipes are available stateside. The European is branded "Dry," and the U.S. is "Extra Dry." If you try the two side-by-side, you can see why the more robust original is a better contender for sipping solo, but maybe that's not your thing. It's all about your personal preference. This is America, baby. Small Batches, Big Flavors Vermouth can be incredibly cheap, yet as with any bottom-shelf booze, you get what you pay for. But, there's good news. You shouldn't have any trouble finding high-end options. In fact, you might have too many. We've seen beers with everything from chili peppers to peanut butter, and a slew of gins featuring the likes of saffron and seaweed, and now you can get in on some really unique artisanal vermouth as well. Yes, ready your monocles, this is real - and just might be worth checking out. Atsby's Armadillo Cake, for instance, is sweetened with caramel made from Muscovado sugar and includes Japanese shitake and wild celery in its infusion. This ain't your grandaddy's vermouth. The folks at Sutton Cellars have a Brown Label Vermouth that makes use of orange peel, chamomile and rosemary. It's all nestled in their Sonoma County wine and punched up with un-aged brandy. Uncouth Vermouth, made in Red Hook, has a smattering of varieties. Serrano Chile Lavender? Beet Eucalyptus? This is a brave new world that begs for exploration. Loving Your Vermouth While that bottle of Cognac can sit happily on your shelf for months, the wine you just uncorked needs to be consumed pretty quickly before it becomes undrinkable. Vermouth, as a sort of hybrid, falls somewhere in between. It holds up much better than wine, but it can lose some of its savor within a couple months, or even weeks, if left alone. Keeping it in the fridge is 100% advised. It will keep your vermouth fresh much longer. If you're not drinking it often, you might even want to buy half-bottles to avoid a compromised quaff. However, if you do find that you've neglected your poor vermouth, do what you would with leftover wine: cook with it. Sweet vermouth can be nice with rich, stewed lentils or a decadent grilled peach. Dry vermouth plays well with citrus salmon or a steaming bowl of French onion soup. You can substitute it anywhere you might use wine, but remember: it will have a much stronger flavor. Ultimately, the best solution of all is probably to just beat the clock and drink vermouth more often. The next time you're having friends over for dinner, pour a little Punt e Mes alongside your appetizers. The bottle just might disappear faster than you think. 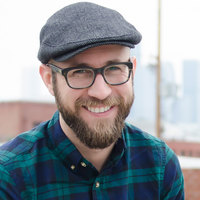 I met a painter recently. He takes travelers on tours through the city, showing them how to docum... Read More

It's a cold, misty night. The moon casts a pale glow over the land. You're feeling introspective,... Read More