When we first implemented topic pitching, it seemed like a fairly simple concept: businesses could request that our writers pitch them topics, and writers could respond with bountiful ideas. There was just one unforeseen problem: the "bountiful" part (or lack thereof). For some reason, writers weren't psyched about the idea of pitching to anonymous businesses. They weren't sure what exactly the businesses were looking for, and they were a bit hesitant about investing their creative resources into such an enigmatic venture.

So we met with DJ, and I laid it all out on the table. Businesses were hesitantly requesting pitches, writers were hesitantly fulfilling them, but the whole ecosystem lacked the level of engagement that I had anticipated. In a very matter-of-fact, practical way he explained: You're not building a product, you're building an ecosystem. And just like that, it clicked. After all, an ecosystem requires mutual respect and transparency. You can't build for one side of the table and neglect the other, so it made perfect sense why we were having problems with this.

To kickstart this system, we added one simple metric to motivate businesses utilizing pitches. Internally, we called it Pitch Review Latency, which in UI-speak translates to: Review Time.

There are four stages of Review Time: Fresh, Interested, Engaged and Idle. If a business reviews their pitches promptly, they'll stay in those first two greenish-bluish worlds and writers will respond with bountiful ideas. But as soon as they get lazy and stop reviewing pitches, writers will follow their lead and become similarly disengaged. To enforce this system and make sure things work smoothly, we also implemented a rigid 3 Strikes policy: If 3 of your requests for pitches fall into the Idle state, you lose access to our topic pitching ecosystem entirely. 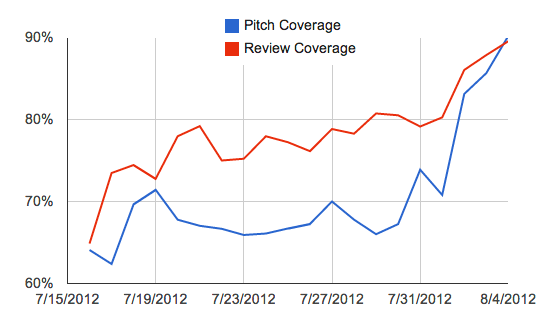 The two sides of the ecosystem played off of each other's engagement. In other words, when buyers became more engaged, so did writers, and when writers became more engaged, so did buyers. At this point, roughly 2/3 of the jobs in our system originated as pitches, and to date, writers have earned over $30,000 from writing about topics they pitched. The moral of the story is: In order to drive marketplace engagement, both sides must be held accountable.