The Role of Digital Marketing in The 2020 Election 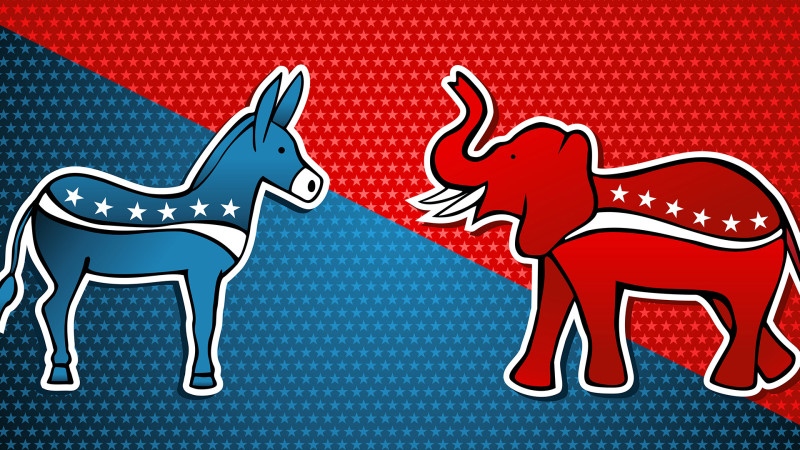 The shift to digital over the past decade has been nothing short of remarkable, especially when looking at the changing trends that have directly impacted -- and been further advanced by -- the recent presidential elections in the United States.

While digital advertising, particularly on social media, has earned widespread attention ever since the 2016 election, its usage on this front actually dates back to 2008 when President Barack Obama became the first candidate to use it in a presidential campaign.

Now, with the 2020 election upon us and more money being spent on digital advertising than ever before, taking the time to analyze the role modern tactics have played in recent elections can help everyday marketers figure out how to better utilize these platforms. So, let’s delve in…

Major corporations, organizations, and countless institutions have long taken advantage of the likes of social media advertising and other digital tactics to help build awareness and gain new followers. Still, the most recent presidential campaigns remain some of the best examples of digital marketing at work.

The reasoning is simple: Controversial issues aside, these campaigns represent some of the largest-scale advertising initiatives in the country with major budgets, analytical teams, and professional backing to match. Meanwhile, each respective candidate has highly specific demographics in mind that they want to reach and, when you put all of that together, it makes for excellent case studies in what social media and digital advertising can do.

Back in September of this year, Wesleyan Media Project had already calculated that presidential candidates had cumulatively invested over $60.9 million in Google and Facebook ads. Meanwhile, those same candidates had spent only a collective $11.4 million on television ads.

Given that previous elections have set records for television ad spend, these numbers alone help showcase the widespread shift to digital advertising mediums. After all, they give candidates the opportunity to laser-target every ad, change messaging on the fly, and turn certain campaigns on or off at the click of a button -- a feature the Biden campaign took advantage of when they temporarily halted all negative ads against the Trump Administration after the President was diagnosed with COVID-19.

Of course, digital analysts have been quick to warn that TV ads aren’t “dead”. Instead, they say the increased usage of digital advertising in 2020 is due to these candidates using such ads as “online focus groups” or a “digital testbed” so these candidates can figure out how to gather more momentum for their campaigns. At least, that’s the opinion of Alex Funk, Vice President of Strategic Development at 3Q Digital.

Funk states: “What we’re seeing now is that digital is the testbed, the momentum-gatherer for these candidates and these campaign platforms … We’re going to see a lot more TV as we get closer, but until then, digital strategists will have candidates diversify across a number of different platforms."

Being quick to launch and comparatively inexpensive next to traditional television ads, Funk posits that these candidates are using digital platforms to test messaging and even try out various creative executions so that they can get direct feedback from voters -- in the form of likes, comments, shares, and general engagement -- before taking the winning concepts full-scale to develop their television campaigns, which typically launch 6-8 weeks before election day.

From this perspective, digital marketing has given candidates the opportunity to design better, more impactful television ads, making every television ad dollar they spend more worthwhile while also giving them weeks of additional exposure in the months prior before the major TV campaigns launch.

The Emerging Side Benefits of Digital Experimentation

Thinking about how candidates are using digital marketing as a means of experimenting and testing before they launch their traditional TV campaigns, the potential impact of that hasn't been lost on analysts. While the primary goal of the candidates may be to test out various creatives, large-scale split tests are also helping them gain more exposure.

CEO of Decoded Advertising, Matthew Rednor, sums it up nicely based on how the algorithms work. "We’re seeing that for clients there’s a tipping point where actually once you’re over five messages, once you’re in the 50-to-60 range, your CPAs start to drop and your ads start to perform better," he says. He also acknowledges that candidates simply couldn't be as agile with TV ads of the same caliber, so digital it is.

This added exposure that comes along with running lots of "test ads" all at once boils down to the algorithms found on Facebook and other platforms, which basically means, the most messages a candidate puts out there, the better their campaign is going to do. This is a takeaway that large businesses can surely get behind, as it means your cost per action (CPA) will drop and your engagement will grow as more people see your ads more often.

Being up for re-election, President Trump was able to pour big bucks into his campaigns with no abandon and, in fact, he's been continuously investing in digital since before he took office. However, the Democratic candidates have helped demonstrate to great degree that paid advertising is far from the only effective strategy.

Since the Democratic candidates had to go head-to-head to see who would ultimately be selected as the 2020 party candidate, each respective candidate spent a lot of time on "earned" and "owned" strategies to try and stretch their budgets. Up until the Democratic nominee was named, most hopefuls relied on these strategies to optimize tight budgets.

For instance, Bernie Sanders made surprise appearances on Joe Rogan's podcast and utilized the platforms of celebrities, like Cardi B, to help spread the word about his campaign to the masses. Meanwhile, candidates like Elizabeth Warren got out and interacted with the public, with some reports saying fans had taken over 70,000 selfies with her by October 2019. Yet another "free" digital strategy was exercised by Andrew Yang, who jumped on Reddit to hold a 10-hour long "Ask Me Anything" session.

These examples help show that paid ads are far from the only ways candidates have been using digital marketing for this election -- and both Trump and Biden have mixed in these organic strategies, too. Trump, for one, has maintained a major social media presence since before his initial election, with a primary focus on Facebook and a steady commitment to email marketing, too. Meanwhile, Biden has certainly upped his digital marketing game, hiring on some of Clinton's digital strategists.

Engagement Is Still Everything

To see who's doing better, Tristan Hotham, PhD Researcher at the University of Bath, dug deeper into each candidates' metrics earlier this month. "My initial analysis of 4,450 Facebook posts from equal campaign periods before the 2016 and 2020 elections indicates that the current Democratic candidate, Joe Biden, is trailing the performance of Hillary Clinton in 2016. In contrast, Trump is exceeding his 2016 performance," Hotham reports. 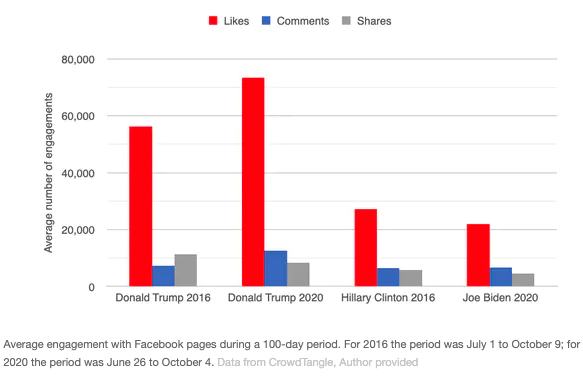 In his article, Hotham acknowledged the importance of organic, unpaid tactics and said that the Trump campaign is outperforming Biden's efforts in this regard. "It is this organic battle that Trump won so clearly in 2016, and the data I’ve been looking at shows a similar situation in 2020."

Hotham's analysis discovered that Trump has seen a 164% increase in Facebook likes since 2016, jumping from 11 million to 29 million. That puts him far ahead of Biden, who only has 3 million (just half the number Clinton had gathered by October 2016).

Of course, any marketing guru knows that page likes truly mean very little because it's all about engagement rates. Interestingly, when looking at the engagement rates of both campaigns, Trump has been seeing a decline in shares since 2016. Clinton and Biden have also seen a similar decline, which Hotham chalks up to people not wanting to take ownership of and spread candidates' content on their own networks.

Meanwhile, when looking at Facebook as a whole, it's also evident that the platform has seen a stall in user growth, which means the followers candidates do have are surely going to be tougher to engage. However, when comparing Biden's page to Trump's, it appears that Biden's following, while smaller, is very active. They're commenting, liking, and even sharing at a rate comparable to Trump's and at a pace that exceeds Clinton's 2016 performance.

Still, the lack of shares is causing struggle for both candidates and it's particularly impacting Biden's video engagement rates. Whereas Clinton averaged even more views than Trump for Facebook videos shared backed in 2016, Biden is averaging just 130k views per view compared to Trump's current average of around 441k. So, while Trump and Biden are seeing similar rates of sharing, Trump's much larger audience has meant a far wider reach for the general Facebook population whereas Biden's content has been struggling to get seen.

When it comes down to it, comparing these candidates' social media strategies and performances is certainly worthwhile. This data reveals and confirms a number of notions, with perhaps the most notable being the reinforcement that engagement is still king on social and everywhere else. Having a large following certainly helps you penetrate a platform at a larger scale, but the most important quality metric when building an audience anywhere is the rate of engagement. In this regard, both candidates have done a comparable job.

Meanwhile, these digital marketing initiatives also go to show the power of up-to-the-minute reporting and the constant feedback loop digital ads can offer. Whereas getting a television audience to immediately donate after seeing a commercial is practically unfeasible, a Facebook ad with a similar call-to-action is sure to evoke an instantaneous response, and that's a key feature the Trump campaign has long utilized as he continuously pushes his merch.

With all of this in mind, these campaigns are an intriguing case study in the world of digital marketing and they can surely help your brand or business when it comes to developing your own strategy. Given their large scale, long-term outlook, and major budgets taking the time to analyze them  -- and putting all political opinions aside -- can certainly help you in your own work.