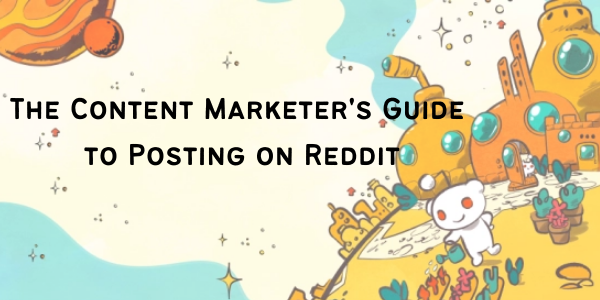 Reddit, billed as “the front page of the Internet,” is the fifth most popular site globally and has 430 million users. Every month, users view more than 30 billion pages on this social news aggregation website. Since the focus is on quality content rather than the user’s following and reach, it’s an enticing channel for content marketing. Posting on Reddit requires a strong understanding of how the site works, its unique culture, and the type of content that appeals to this audience.

Reddit users can share content, vote, and comment. If the user likes the submitted content, they upvote it. These positive votes move the content further up the page, where it’s more likely to be seen by others. If they believe the submission is low-quality, spammy, overly promotional, or otherwise fails to meet their criteria, they can downvote it, which lowers its position.

Reddit also uses upvotes and downvotes on your posts and comments to calculate your Karma. This number shows up on your public profile and allows others to see how active you are and whether your posting on Reddit is well-received. The website is organized into Subreddits, which are communities focused on specific topics. Over 2.2 million Subreddits exist, although only 130,000 meet the criteria of being active. You can find Subreddits for nearly everything, such as startup businesses, long-lasting products, system administration, and cats with tucked-in paws. (You would be amazed at the number of incredibly specific cat Subreddits out there.) Most Subreddits are created by users, although some companies established their own branded communities.

Reddit also has the r/All Subreddit, which aggregates the site’s most popular submissions from nearly all the Subreddits (some choose to opt-out of r/All eligibility), as well as the default home page, which is customized based on the Subreddits you join.

Each Subreddit has a distinct community feel, with its own moderators, rules, subset of users, voice, and preferred content type. Reddit has gained a reputation for being a hostile environment for brands, with the video game brand Electronic Arts having the most downvoted post in Reddit history, and the Subreddit r/HailCorporate dedicated to calling out and mocking blatant marketing efforts.

However, when you take the time to understand the lay of the land and become a valued contributor to the community, you have the opportunity to create lasting relationships with a large, highly engaged, and loyal audience through posting on Reddit.

They spend a lot of time on this website, averaging 16-minute sessions. Ultimately, what Reddit users are looking for are interactions that are trustworthy and authentic.

Reddit is straightforward about user expectations and etiquette when you’re posting on Reddit. Following Redditquette helps you avoid many of the pitfalls that stop brands from engaging with this channel on a meaningful level. You can find the complete list here. Most of the rules cover familiar Netiquette grounds, but some are Reddit-specific.

Some of the most relevant rules and recommendations for content marketers in this document include:

Subreddits may have their own list of rules in addition to standard Redditquette. You’ll find these listed in the sidebar on the community page. Pay close attention to those that restrict or prohibit self-promotion and what they consider “spammy” content. If you have any questions about whether your posting on Reddit fall under these rules, message the moderators. The moderator list also appears in the sidebar, along with a general “Modmail” link that goes to that team. Don’t run the risk of being banned from a Subreddit.

Establishing your brand on Reddit is more involved than setting up a social media profile, but you stand to gain significant benefits from the effort.

Verto Analytics collaborated with Reddit on a study researching the site’s role in the buyer’s journey. They found that Reddit users are more informed and valuable buyers and strong brand advocates.

The voting system on Reddit gives you much insight into how well your marketing efforts are received in the moment. You learn as you continue posting on Reddit since each Subreddit has its own dynamic and unwritten rules that dictate successful submissions.

Start using the site long before posting on Reddit. When you choose a username, use a format such as Brand+personal name to add personality to the account. Begin establishing yourself in the community through non-promotional comments and voting on submissions. Choose a handful of relevant Subreddits to join and watch closely to see which aligns with your brand’s marketing.

You’ll also want to follow some of the larger Subreddits to get a feel for Reddit in general. While you want to focus your marketing efforts on targeted niche Subreddits, understanding the site’s culture overall is helpful.

Once you feel confident that you understand a Subreddit’s rules and what content they respond well to, and you have some comment Karma built-up, submit valuable content. Avoid posting derivative or unoriginal content, and stay far away from anything that looks like a hard sell. You want to make the community better than when you found it.

Focus on your submission headlines, as that and a tiny thumbnail are all a user sees before they click. Make every word count with a short, succinct, and engaging title. Avoid clickbait or any other type of misrepresentation. Trust is everything when you’re marketing on Reddit.

Some Subreddits have specific title requirements or may offer you the opportunity to add “flair” to a post. Flair is a way of tagging a submission so users can quickly filter through posts.

X-Cart found that the best days to post content to Reddit are Saturdays, Sundays, and Mondays. The best times on those days range from 6 AM to Noon.

Here are a few examples of ways that brands have leveraged Reddit effectively: While organic posts make up the majority of Reddit content, the site also offers paid posting. You should still take the time to establish yourself in the community even if you plan on primarily using Reddit Ads, as the brand recognition can lead to more click-throughs.

Promoted posts use an auction-based system on a CPM, CPC, or CPV basis. You can easily set these up on the advertising dashboard and target the communities and audiences you’re interested in. The posts appear in-feed and look virtually identical to a standard Reddit post, outside of being marked as promoted. You can choose whether or not to have comments enabled on the post. Continue to focus on providing value with these promotions.

Much like promoted posts, paid video ads appear in-feed and are labeled. You use the same auction system to set up your videos, although you only have access to CPM and CPV bidding for this category. Your videos auto-play if you use Reddit's native video hosting, or you can serve it on a third-party site with a click-to-play option. The aspect ratios supported are 1:1, 4:5, 4:3, and 16:9 and the video length can go up to 30 seconds.

Takeover ads are available on CPM and must be arranged through the account team directly. You have promoted posts and banners that put you front and center on a specific Subreddit, on the front page, on Trending Today, or on all of Reddit for 24 hours.

Content marketing and Reddit are a match made in heaven when you think about it. Content marketing has long been about providing value to buyers and establishing your brand as a trusted source of information. Reddit users appreciate high-quality content and make it known through their engagement.

Scripted connects you with social media writers who are savvy about the latest trends, up-to-date on the nuances for each platform, and able to create content that matches the discerning tastes of the Reddit audience. Each writer goes through an extensive vetting process, and you can check out their writing samples and client reviews to find the best match for your requirements. Get in touch with Scripted to power your Reddit content marketing goals today.