Earth Day - A Deep, Engaging Dive into the History of Earth Day 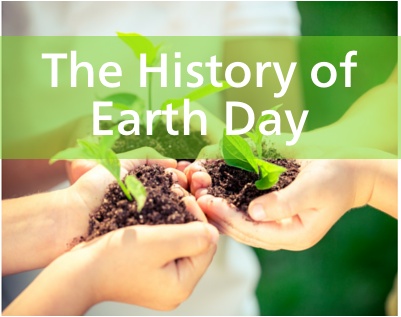 Fifty years ago, "environment" was a word rarely used, and most people didn't realize the dangerous effects of air and water pollution.


To discuss the history of the first Earth Day, you must go back in time just over 45 years to 1970. This was a time when Richard Nixon was president, the Vietnam War was in full swing and Woodstock has just taken place. The streets were full of gas-guzzling automobiles, smoke poured from factories across the country, and little, if any, notice or legal ramification was given to companies dumping tons of toxic waste into the air and water.

People were dealing with the breakup of the Beatles, and the death of music legends like Janis Joplin and Jimi Hendrix. Although the release of Rachel Carson's book, "Silent Spring," in 1962 did start to bring awareness to the dangers of pesticides, not much action was taken to fix the situation; the last thing on most people's minds was the environment. Strong initiatives didn't surface until Wisconsin Senator Gaylord Nelson introduced the idea of Earth Day to the US Congress in 1969.


Designated as a day for environmental education, the first Earth Day was held on April 22, 1970. Activists -- those who felt like they had no voice previously -- organized and planned environmental-based events throughout the country. In the end, more than 20 million people participated in the event and took a stand to protect the earth. Major events were held in Washington DC, Chicago, Philadelphia and New York, where celebrities like Ali McGraw and Paul Newman took to the stage to show their support.

Effects of the First Earth Day


The goal of Earth Day was to bring awareness to a variety of environmental issues -- and bring awareness it did. Shortly after the first Earth Day, public pressure led to a massive shift in environmental policy; there were few laws geared toward protecting the environment in the 1960s, but the 1970s brought about new legislation, such as the Clean Air Act, the Endangered Species Act and the Water Quality Improvement Act. This decade also witnessed the creation of the EPA.

Transition into a Global Event


Earth Day began to grow in popularity over the next two decades: Educational events were held in classrooms at all age levels, and activists planned events in nearly every major city in the country. News about Earth Day's success in the United States spreads internationally as other countries warmed to the idea. They hoped to play off the success in America to bring environmental awareness to their citizens as well. Earth Day went global in 1990, and it was celebrated by more than 200 million people in over 140 countries.


Earth Day has come a long way over the last several decades, and it has definitely raised the level of awareness for environmental protection. Sure, there are climate change doubters, defiant politicians and big business lobbyists fighting against environmental regulations, but the public support on Earth Day is undeniable. It is recognized as the "largest civic, secular event in the world," with more than one billion people participating in over 192 countries.

When April 22 rolls around again, you can expect to find people participating in protests, planting trees, enjoying nature, attending educational lectures, donating to environmental charities and encouraging other great events. You can get involved, too, by participating in any of the numerous events or donating to the cause.