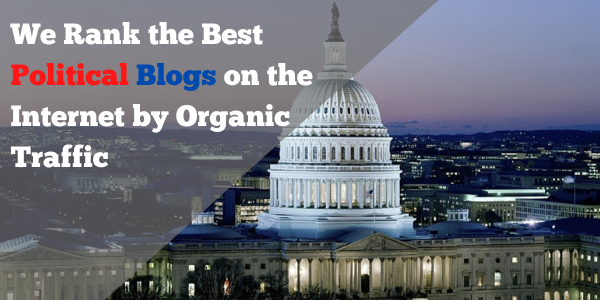 Politics are important to people, especially at a time like right now when we're so incredibly divided, misinformation is rampant, and hot-button issues feel even more pressing than ever before. In this climate, it makes sense that people want to get their political news from a source they trust.

If you run a political blog and you want to increase your organic traffic, the big question is how to become one of those trusted sites for your readers. What kinds of content do you need to publish? How frequently should you put out new posts? What else do you need to think about?

Below we feature the ten best blogs across the political spectrum and rank them based on organic traffic. (Blogs with the most organic traffic from the previous 90 days, as of March 9, 2021.

Source: Alexa) We'll cover what each of them does well, and how you can learn from them to make your blog even stronger.

The New York Times Politics is NYT's Political branch. It offers news, multimedia, and opinion on a wide variety of political issues.

What it does well: NYT Politics offers name-brand recognition. People trust this platform because the greater entity (The New York Times) has made a strong name for itself over the years for accurate, discerning reporting such as this award-winning piece about the Trump family's finances. As a result, the political blog has over 49 million Twitter followers. The lesson for smaller blogs is this: find your niche and dominate it so that your name alone is synonymous with quality.

The flagship political blog of the Fox News Network, Fox & Friends is a conservative news blog that experts have named as one of the top news sources in the 2016 election.

What it does well: Fox & Friends thrives on controversy. And whether you agree with their politics, it's easy to see that they've mastered the art of shocking, explosive content that makes readers feel powerful emotions.

The attention-grabbing nature of everything about this blog - from the headlines of its posts to the topics it covers - has conservative readers clicking through to see the news told from their point of view, and liberal readers clicking through to stay informed on what "crazy thing" the platform will report on next. It also features blog posts on lighter topics such as cookery. Either way, it adds up to hits and organic traffic for this political prizefighter.

Politico provides real-time, breaking news updates on a wide variety of topics. It publishes dozens of posts each day.

What it does well: In a political climate where virtually everything feels radical and heated, Politico walks the delicate line of moderation.

Its readers want moderate, realistic, fact-based reporting, and Politico provides it consistently, reliably, and without too much fanfare. (Case in point: Politico's coverage of the 2020 presidential election.) Smaller political blogs that want to draw a similar audience can learn from this no-nonsense, trustworthy approach to the daily political content.

Vox is a liberal news blog run by Ezra Klein, a former journalist at the Washington Post. It markets itself as a no-nonsense place for anyone who wants to understand the news, plain and simple.

What it does well: Vox is a brilliant study in the power of influencers and content. It features a variety of popular personalities like Matt Yglesias and Klein himself.

These political influencers naturally pull their base to the platform and increase the perceived trustworthiness of the content for their fans. While political blogs aren't generally a place people think of utilizing influencer marketing, Vox demonstrates just how effective it can be for content.

When you consider that 64% of consumers currently want brands to connect with them as individuals, it's clear that incorporating some elements of influencer marketing into your content strategy could be a powerful move. Even simple things, like featuring opinion pieces by well-known personalities (published in The Big Idea section), or interviewing a local politician can go a long way to draw in more diverse reader bases and make your material more authoritative.

FiveThirtyEight is the political brainchild of Nate Silver, responsible for election forecasts like the one seen in the 2012 presidential election when FiveThirtyEight correctly predicted the winner in each of the 50 states.

What it does well: Unlike many other news sites, both liberal and conservative, which lead with opinion or value, FiveThirtyEight places a strong focus on data. It publishes about five posts each day that all generate or analyze statistical information on a wide assortment of political topics.

Besides allowing FiveThirtyEight to stand out as a trustworthy leader in the industry, this data-centric approach makes it a destination for other, smaller sites that want to link to and learn from an authority source - which is a big win as far as content marketing goes.

DailyKos is virtually a household name in political blogs. As one of the oldest political news destinations on the web, it provides openly liberal content and receives about 25 million unique hits each month.

What it does well: While DailyKos posts thoughtful, well-written, high-quality content, where it excels is in content quantity. Currently, the site is churning out about 29 unique posts each day.

While smaller political blogs can't keep up with that output, it's clear that fresh, daily content wins with readers. There's no one-size-fits-all rule for how to publish new blog content (it depends on your bandwidth, budget, and niche).

Still, HubSpot reports that posting frequently is one of the single most effective ways to increase organic traffic. If maximizing traffic is your goal, HubSpot recommends posting small, new blogs at least 3-4x per week and large blogs (including new and updated posts) at least 4-5x a week.

Boing Boing was once the most popular blog on the internet. Today, the platform shares a variety of selected features, podcasts, blogs, and videos that capture the interest of the editors and intrigue the reader base.

What it does well: While Boing Boing publishes organic content, it also pulls in a massive amount of third-party content from other places. In this sense, it's more of a directory than a true blog.

From a content perspective, it's also a master of multimedia. Instead of only offering textual content, it posts videos, audio content, and more - which makes it highly popular among readers who want to interact with their news media differently.

Right now, 70% of companies are investing heavily in content marketing, which also encompasses video marketing. And considering that consumption of mobile video has increased 17x since 2012 and about 54% of consumers want to see more video content from the brands and platforms they follow, it's clear this is a strategy that will pay off - both in the long- and short-term.

What it does well: PoliticusUSA understands its approach, and it delivers it well. While there are many news sites out there, this one makes a point of noting that it is - above all else - an independent political blog. (Read why here.) By making this value central to everything it does, it draws like-minded readers and supporters.

NewsBusters is a conservative news site that dedicates itself to exposing and eliminating what it sees as liberal news bias. It puts out about 28 posts a day and has over 2.9 million Facebook fans.

What it does well: Like PoliticusUSA, NewsBusters knows how to lead with its value. Everything about the site - right down to its pugnacious bulldog logo - positions it as a tenacious champion of what it sees as the truth. The blog also calls out what it perceives to be media bias in its Fact Check section. This blog draws in its target base of readers and helps it secure its spot in a specific political niche market.

An American political blog that's a branch of the Center for American Progress (CAP), ThinkProgress is a progressive blog dedicated to public policy research and advocacy. It provides news stories from a progressive perspective.

What it does well: While ThinkProgress has a massive content archive on the site, it divides that content into sections ('World,' 'Politics,' 'Health,' etc.) This makes it easy for readers to navigate.

Do You Run a Political Blog? Scripted can Help you Increase Organic Traffic

Thanks to the rise of self-publishing platforms, anyone can start a political blog. The differentiating factor, however, is that not everyone can start a successful blog. Besides creating content and finding stories to cover, running a successful political blog requires a documented, actionable content marketing plan. It also requires extensive knowledge of SEO best practices.

In 2019, Google released a set of new search quality evaluator guidelines called EAT and YMYL. EAT stood for "expertise, authority, trustworthiness," and YMYL stood for "your money or your life." YMYL, specifically, applied to sites Google identified as having the ability to affect a reader's health, happiness, financial stability, or safety. Examples of YMYL websites include financial and medical sites and (you guessed it) news and political sites.

Under Google's 2019 guidelines, these sites have drastically increased page quality requirements since they're so important to readers. To rank well and earn ample organic traffic, they need lots of EAT - expertise, authority, and trustworthiness.

That's where Scripted comes in.

Our team of expert writers knows what it takes to create winning content for the political niche. Besides conducting extensive research and writing strong, fact-based pieces, our writers can employ the SEO best practices your blogs need to rank in this sensitive industry.

Ready to learn more about Scripted or how we can help your political blog stand out? Browse our extensive network of highly skilled political writers now.