How to Write a Stellar Short Video Script 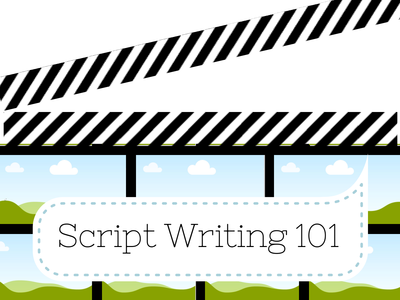 Writing your first screenplay may seem intimidating, but the format is easier to learn than you might think.

We've been talking a lot this month about the increasing need for writers to diversity their skills, whether that includes design, image use, or, in this case, script writing. There are structural and contextual basics to all screenwriting that can be learned and mastered-- whether you're interested in producing a web short or a three-hour epic. Here's how to write a script for a short video:


Just as an architect's blueprint is the foundation for the construction of a building, so too is the script for shooting a video. As the writer, you are essentially the "architect" of what will be shot and recorded by the camera. A video script is a chronological run-down of scenes, shots, action and dialogue specifying who is saying and doing what, and when they're saying or doing it. Each page of the script represents roughly one minute of screen time. Most shorts run from three minutes to twenty minutes in length, which gives you somewhere between three to twenty pages of script, accordingly.


The physical content of each page is as follows:

See an example script to determine if you've got it right.


After the technical formatting is in place, the most important element of the script is content: the story. Regardless of the type of video or its length, its purpose is to tell a story, either literally or figuratively. If you don't know where to start, it's best to stick to the basic three-act dramatic story structure.

What are your tips for writing a video script? Share your thoughts with us below.

To Read More About Writing and Design, Click the Links Below:


5 Design Skills Every Writer Should Master
How to Convey Authority in Design
Responsive Web Design and the Issue of Optimal Viewing Across Different Devices
Published by Katharine Miller on Monday, July 28, 2014 in Writing.