What if the police interrupt your date?

What if the police interrupt your date?

We've all been there. You're trying to have a fun and romantic first date, and the next thing you know, police officers have surrounded your car with their guns drawn.

Okay, maybe we haven't all been there, but it may surprise you how many first dates suffer an interruption from the Five-O. There's usually driving involved (picking up the date, going to a venue, taking her home), there's often alcohol being imbibed, sometimes there's public nudity … heck, sometimes it's all of the above.

However, the Po-Po interfering with your evening of romance can end up giving you the opportunity to tell your date a lot about you. And I don't mean things like the fact that you were driving on a suspended license or that you're wanted in five states for illegally importing wild orchids. I mean moments where you can show your date who you are under pressure, something women find very interesting indeed.

Who does your date see when the pressure is on?

But what about being pulled over for other reasons? These routine interactions with peace officers can be used to show your coolness, savoir faire, and ability to roll with the (hopefully not literal) punches.

Maybe you're driving a bit too speedily (but in a cool way, natch) and you see those bubble lights go on behind you.

(a) Scream at the top of your lungs some serious aspersions as to the character and parentage of the officer pulling you over?

(b) Try to make it look like your date was holding that big bag of weed the whole time.

(c) Make a joke out of it, saying something ironic like "They're onto us!"

If you picked (a), your date will see you as being a psycho. And she will be correct.

If you picked (b), you are not getting a second date. Also, don't bring a big bag of weed along on a first date. At this point in your relationship, she doesn't need to know where your extra income comes from.

If you picked (c), you will come off as cool and funny, someone whose feathers don't get easily ruffled.

Dating websites like WhatsYourPrice.com strongly recommend that guys and gals on a first date don't have sex on that date. However, we're all adults here (unless it's "Take Your Daughter To Work Day," in which case maybe you could just bookmark this article and come back tomorrow). We know that sometimes amorous feelings make a couple feel the need to pull into a rest area or along a little-traveled country road and get busy in the backseat.

So let's say you're playing a little game of reverse leapfrog in the rumble seat and then there's a tap at the window and a flashlight illuminating either her butt or yours. (I'll leave out for now the more exotic positions possible in a Cube or an Escalade.) You're nekkid, you're trying to stop being aroused in a hurry, and you just know that Officer Friendly is amused even as he informs you that boinking by the side of the road isn't strictly "legal."

(a) Share a laugh with the officer and bond with him (or her) over how love makes you do strange things. (Your date will notice the use of that "L" word and you will get points.)

(b) Ask the officer to join in.

(c) Beg and plead and tell the officer you have a sex addiction and this is your sponsor helping you through a hard patch. (Extra points if the officer goes, "That's what she said.")

If you picked (a), you may well both still get arrested, but you at least made it romantic.

If you picked (b), OMG you are awesome.

If you picked (c), again, this might not keep you and your date out of handcuffs, but at least you have shown a sense of humor in the face of copversity.

The two above examples are simple compared to the question of what you should do if you're stopped for some routine reason (headlight out, going a few mph over the speed limit, etc.) and it turns out that your date has an outstanding warrant. It could be for anything from unpaid parking tickets to multiple homicide, but let's say it's something banal but serious enough that she's not going to make bail until she gets in front of a judge. This means she's looking at, at the very least, a night in jail.

(a) Throw yourself against the squad car and scream, "TAKE ME! TAKE ME INSTEAD!

(b) Thank her for a lovely evening through the cop car window and tell her she can call you collect whenever she gets phone privileges.

(c) Plan to show up in court on Monday, pay her bail, set her up with a good defense lawyer, marry her while she's in prison, and live a full and rewarding life with her once she gets out; but then realize that you don't even remember her last name and she was kind of bitchy to that waitress, so screw it, lots of fish in the sea.

If you picked (a), you are a hopeless romantic who is about to get tased.

If you picked (b), post about this on social media so chicks who like very mildly bad boys will seek you out.

If you picked (c), go ask that waitress out. Tell her you turned your earlier date in to the police because she was bitchy to her. Win-win-lose, but the "lose" part isn't you, so whatevs. 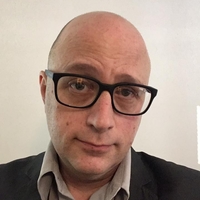 I am the author of 17 books including novels, shorter "novelettes," a short story collection, and a book of nonfiction. Several were ghostwriting projects for others. I've been a professional writer all my adult life. Starting in 1988, I have been a newspaper reporter and copy editor for several newspapers; a blogger and "ghostblogger" ; a contributor to several online content portals including Buzzfeed and Thought Catalog; an ad agency copywriter; and an SEO writer for content providers such as Textbroker. I teach fiction writing and give presentations and seminars all over the country and also moderate fiction workshops and offer coaching services to new and veteran novelists. My areas of expertise include writing about current events, entertainment, and New Age spirituality (both introductory articles and skeptical content). Of c...

It&#39;s no secret in El Paso that divorce and remarriage have reshaped the American family over ... Read More