It is not uncommon for people at Whitman, and in my home region of the Pacific Northwest, to suffer from Seasonal Affective Disorder. Sometimes when I complain to my parents on the phone about classes or the disillusionment I sometimes feel as a twenty-something on the verge of graduation, the first thing they'll ask is, "Well, hey, is it raining there?" as if the weather is indeed a significant contributor to my mood. They're right—I soak up my environment like a sponge, which usually pays off during high-energy events like sorority recruitment or weddings but can be my downfall in very serious or psychologically intense contexts.

This self-knowledge made me nervous to enter the space of WSP. I wasn't concerned about being in medium security with murderers or gangbangers or having conversations with them because, frankly, I know I can talk to a rock and probably get a response. I felt fairly prepared in my background knowledge of how to act and dress in a prison or jail space, given my mom's occupation and the various times I've had to bring her lunch to work at SCORE Jail. I had no fears about my own or my classmates' personal safety, and I felt as though I knew how to interact with the corrections officers in a respectful manner.

Selfishly, I was nervous about the impact the WSP environment would have on my emotions and my day-to-day functioning simply because it symbolized exactly the type of mass incarceration we were investigating, and that bummed me out. I'm not the one who has to live there, ostensibly for the rest of my life, I told myself. Woman up. You're just a visitor; you get to leave.

To get to our classroom inside Washington State Penitentiary, we had to pass through eight distinct secure areas. Some of the spaces and walkways felt so expansive that they didn't necessarily connote the double-door secure entrance that the phrase "sally port" might, but I remember my mom's response when I told her how many there were after our first class:

It has rained twice over the course of our Tuesday evenings spent at WSP. The first time was a light sprinkle, which began during our usual walk through the sally ports. We shivered in our Patagonia and North Face raincoats and moved a little closer to each other as we strode past the guard towers watching us.

The second time it rained was more of a torrential downpour. We scurried through the sally ports and waded through puddles where the concrete pathways lacked grates for draining purposes. We stuffed our bulky folders and notebooks and dog-eared readings under our coats so the ink wouldn't smear. My entire front was soaking wet; my jeans had turned a different color. When I shook my incarcerated group members' cold hands a few minutes later, we talked about how it hardly ever rains like this in Walla Walla. I had only lived here for four years, but they had lived here for decades, and even they admitted to the unusual nature of it raining so hard for so long.

At the start of our semester, Heather mentioned that it would be unsettling to be released into the night after class, drive in our cars, and go home to our civilian lives, while our incarcerated peers are strip-searched and fall asleep in their cells.

I drove to and from the prison with Molly, Nolan, and Bryn in Nolan's car. Nolan chain-smoked cigarettes to and from WSP as we raced down side streets; I would normally sit behind him with Bryn in the backseat, unclear if it was the cigarette smoke or the wind from all four rolled-down windows that made my eyes water. During our five minute ride, we recapped how our weeks had been, how midterms or finals or senior theses were going, and what plans we had for the weekend. This ride with the same people and the same route was my weekly meditation. We were moments away from shedding our privilege for a few hours and engaging in precisely the type of experiential learning liberal arts education preaches. How lucky we were to have our names on a list that allowed for our arrival to—and exit from—this institution.

Last week, on our way to the prison, almost the entire class was caught behind a train that kept shifting forward and backward but never stopped blocking the road. After a few frustrating minutes of waiting, Bryn turned to me and said, "So, should we go over speech stuff, or what?" I pulled out my flashlight on my phone and we read through our pieces together until the train started moving again and we could continue on our way.

Our drives home were a singular exhale, a sigh layered with relief, exhaustion, and satisfaction. We listened to Sales or Cigarettes After Sex and compared difficulties and triumphs in our groups. We discussed Grandpa's progress with public speaking, and expressed disbelief the first time James shared his story with the class. We talked about how nervous we were for the Town Hall, the seasonal shift in the Walla Walla valley evident as we transitioned from sweating in backseat and watching sunsets out the windows to hydroplaning through puddles in the December dark. 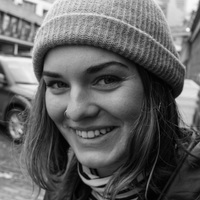 The biggest star of Saturday Night Live this season is not the hilariously candid Leslie Jones, t... Read More