Virtual Medicine an Evolution in the Battle Against the Bulge

Obesity and weight issues are an escalating problem in many western countries. A problem that costs health systems and taxpayers billions every year. However, virtual medicine is seeking to reduce this financial burden with reality therapy that battles the bulge. The Australian Bureau of Statistics estimates that obesity costs Australian taxpayers more than $8 billion dollars per year, whereas experts in America report that the nation is spending more than $140 billion a year on obesity. Drastic measures such as gastric bypass surgery and extreme diets have risen, in some nations, by as much as 800 percent. Regardless of this, it seems that it is inactivity and poor lifestyle choices that are continuing to increase the body weight of western inhabitants. With an urgent need to reduce obesity numbers and teach Westerners better living practices, virtual medicine has introduced a reality therapy that teaches overweight individuals how to better manage their wellbeing. Joe Mastro, product development and customer support manager for Virtual Medicine, an Australian based virtual reality therapy (VRT) firm, believes that his company is able have a positive impact on the weight and wellbeing of Australians through the use of guided imagery. "Most people with weight management problems have tried to lose weight on previous occasions," said Mastro. "Therefore, contemplating new attempts to lose weight may be surrounded by the fear of more failures. Stress, anxiety and possibly even depression play a part. Although they desperately want to lose weight, they have trouble believing that more dieting and more exercise, by itself, will create the results they desire," he said. "The VRT weight management program is a psychological intervention strategy, which helps people with motivational problems to alleviate all the stress and anxiety that's previously caused them to fail," Mastro said. "VRT helps people to feel good about themselves, motivates them to exercise, makes them sleep better, and it helps them to manage and cope with stress and anxiety. The VRT program is not a replacement strategy for exercise and a healthy eating plan," he said. "VRT practitioners use a two pronged approach," said Mastro. "The VRT programs are used to address issues on the unconscious level. Counselling is then given to help create change on the conscious level. Both approaches aim for a body-mind balance and complement each other," he said. "This, then allows people to achieve a life plan, making a healthy diet and regular exercise achievable in the long-term." Mastro, who has a background in information technology, says that he has a keen interest in health and fitness and has worked in the industry for 10 years. His motivation to help others achieve their weight loss goals stems from being overweight as a child. "I learned from an early age what it's like to have obesity issues," said Mastro. "As a child I was very overweight and experienced first-hand the social difficulties and pain of being a fat kid. This continued on into my early adolescence and I began to experience health issues as a consequence, he said. "Gall bladder disease, back and knee problems and breathing issues were all part of my childhood. Seeing people going through these same experiences is enough fuel to keep me going and continually push to optimise what we do." To keep himself fit, Joe Mastro works out regularly and believes that it is an important part of his day. "I work out five days a week," said Mastro. "I get up at 6am and do a 60-minute workout that includes a medium intensity cardio and weights program. If I don't get there in the morning, I usually don't get there at all," he said. "So it's important for me to make sure I drag myself up when the alarm goes off because there is no room in the rest of my day to get there." Mastro feels that too many people consider their physical and mental wellbeing as being two entities, rather than one. "Too often we look at our physical health as being separate from our mental health, said Mastro. "More often than not, our physical state is the manifestation of our overall thinking and state of mind," he said. "Working from the inside out as well as having a commitment to a healthy lifestyle is imperative for long-term success." "For me, a long-term commitment to exercise has become a necessity," said Mastro. "I know how different I feel when I don't get my workout. The hormone changes, the sluggishness and at 46 years of age, I feel like my whole body isn't properly lubricated when I miss a workout," he said. "So it is important to make a commitment to exercise every day. It's actually easier to make it a daily habit than a twice-a-week deal." Shane Warren, a registered psychotherapist and certified practicing hypnotherapist that uses VRT, says that he is a great believer in people achieving almost anything if they live with simple lifestyle principles that include a healthy diet, gentle exercise and a positive frame of mind. Warren, who first experienced VRT 3-years ago, says that he uses a combination of VRT and hypnosis to help his patients reach their health and fitness goals. "I was first introduced to VRT in 2009 and I was excited by the mix of hypnosis script with complimentary visuals," said Warren. "We live in such a visual society now. So, I gave it a go and found it worked very well," he said. "It helped my clients who needed motivation to get active." 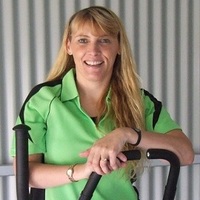