A few years ago, one of my daughters, who was happily and healthily bored, was outside coloring the bark of a tree red with Kool-Aid powder mixed in oil. Kool-Aid is a wonderful permanent dye that I suspect may color-fossilize the small intestine of anyone who drinks it. Kool-Aid stains never go away. So anyway, my 12-year-old daughter mixed some Kool-Aid up with water, and some with oil, and spent an afternoon trying to figure out which one held a stain better. Earlier in the afternoon she had done some noninvasive animal testing on her little brother by trying to dye his Mohawk red with Kool-Aid, and had moved on to the bare, stubbley sides of his head above the ears, and then, punitively, beyond—on his face and neck, since her brother was breaking one of the cardinal rules of little brotherhood: he was Speaking Too Much, and she must always Put Him In His Place whenever she accidentally found herself enjoying a quality moment with him. Disgusted with the camaraderie, my daughter left her brother dripping Kool-Aid stains so far down his naked torso that he began to stain his own butt crack, and went out front to see what she could do with the leftover Kool-Aid mixture. She spied the dog. "Comere, Rocks," she said. The dog cowered under our truck as if he were about to get a bath, not knowing that he had escaped the much more humiliating fate of pink-stained blonde terrier fur. So my daughter started pasting the Kool-Aid and oil into the crevices of the bark of a big tree, and began to race stripes of it down to the bottom. She was naming the stripes in honor of famous Thoroughbreds when she spied a friend of hers getting out of her mom's car. "Hey…ya wanna come color this tree bark with me?" asked my daughter. "Uh, I dunno. I have to check my schedule," said the friend. My daughter's arms dropped to her sides, staining her shorts and thighs. "You have a schedule?" my daughter and I said in unison. "Sure, "she shrugged. "Don't you?" It is true. My daughter's friend, even smack dab in the middle of summer, had a schedule of activities that she followed, which included strength training, speed and agility specialization, soccer practices, and soccer games, not to mention soccer meetings. She was twelve. We have met so many kids like this throughout the years that, in comparison, my children appeared to be neglected slackers, since I purposefully did not book too many scheduled activities for them. Sure, my kids played sports, but they also played with stuff. I let them take apart my old small appliances and electronics that broke down, then I let them remake them into little cities on the floor. I let them paint furniture, set up fish tanks, breed mice, cut up cloth to sew clothes for the dog, and take the boat out alone for miles in the canals in our neighborhood. Doing these things without a hovering parental drone to correct or second-guess them allowed them to expand their abilities to take care of themselves, make sensible decisions, get out of scrapes, and do things without needing approval, not to mention it left me alone for two seconds, which is important to my survival and theirs, because I am not a natural lover of children, noise, chaos, questions, or even bright light most of the time We are the trailer trash of our solidly middle class, suburban neighborhood. I cut my family's hair. We drive used cars and repair them in the driveway. We light firecrackers in the backyard just for fun. We do rocketry — sometimes with real rockets and sometimes with Diet Coke and Skittles. We do our own house repairs. We buy used everything except socks and shoes and underwear. We take clippings of other peoples' plants and plant them in our own yard. If everyone who lives on our block donated one of their luxury car payments to, say, Angola, there would be enough money to feed and deworm every child in that country for a quarter of a year, and as such, I am sure some of our actions are viewed as "low-rent" by our neighbors, but we don't care. Our kids have grown up grubby, active, usually happy, occasionally busy, and sometimes bored. Some of the best learning, thinking and creativity come from bored kids. Here's how you train bored kids to become people who can amuse themselves while stretching their creativity: Turn off the television, put away the video games, and ban the internet for a significant part of each day. Let your kids get so bored that they start plucking at their shirts and whining and pacing about the house. Suggest to them a "fun" activity, such as scrubbing grout, cleaning out their closets, or organizing that little drawer in the kitchen that holds all the old batteries, solar calculators, stubs of colored pencils and orphan power cords. After you suggest these truly awful ideas, quietly set out a pile of magazines, some glue and glitter and scissors and paper in the middle of the table. Ignore the little whiners. See what they do. When they ask you if they can use it, don't say "yes," because then they will think you want them to do it. Instead say, "I don't care, just don't cut each other up," and go about your business. They will be drawn to the glitter and glue as if they were candy, and they will make you some fine art. Later, do not bitch about the glitter you find everywhere: your shoes, your toothbrush, the refrigerator, or in your husband's beard. 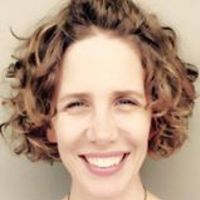 I am in my third year of working for a busy literary magazine. We received hundreds of stories pe... Read More