The Road to Elephants

The Kingdom of Hejaz, Arabian Peninsula - 1923 This Friday morning, when Emad told Yasmine that the circus was in town, she decided that she and her brother were running away to join it. Yasmine and Yunis Hajji stood on the back doorstep of the sprawling mansion. Yasmine was eleven years old and Yunis was seven, but they were both small and so sensitive to the sun that a few minutes outside had their faces burning like the side of a peach. They had a small suitcase between them that they snatched from the pile of junk behind the teakwood screen by the stairs. It was stuffed with all sorts of essential items (clothes, shoes, toiletries, oranges, old stamps, picture frames of their beloved and long-gone family members, and a compass, which neither one of them knew how to use). The suitcase was heavier than it looked for either one of them to carry for long, but Yasmine was determined to drag it along stoutly. She had already started to sweat. Now, it was an unfortunate happenstance that this doorstep was underneath the dreaded lookout window. Because of this window, they had been caught so many times at mischief -- mainly attempts to escape for a half hour of play on the hill beyond the manor. Dada Afra, their governess, manned it with the diligence of a soldier on guard duty. She looked out and saw every trace of activity or mischief. She saw the grounds, the gate and the skewed pathways. In the Hajji mansion, where no master or mistress resided, all that was within and without adhered to her terrible will. Their parents had been away for five years now. No word had been heard or letter received. Finally, Dada Afra had decided that the situation was dire enough and had taken it upon herself to break the news to the children that their parents must have liked it better in Indonesia than they liked it here because Indonesia was very green. There were enough pilgrims in Indonesia to teach the holy pilgrimage to and that was enough to keep them busy for a long time to come. And as for the children, they had her. They must learn from their parents' sacrifice, she had told them, and be obedient and pious. With that, she had tucked them both into bed without a comforting word to assuage the grief and anguish that soon muffled them into a nightmarish slumber they would never forget. She had then locked all the doors and all the gates. She had kept a few rooms open for them to play in. The library she had kept open because the books were few and insignificant. But Yasmine had read them all to pass the time, and when she was done, she read them all again. Dada Afra kept people away because, she would say, children without parents were not safe from evil or from gossip. They were only allowed to talk to Emad, the gardener, whenever he happened to make his way to the bed of parched and bitter calendulas beneath the lookout window. She kept a strict regimen of punishment and no reward with the children in order to temper their wild, weed-like natures, especially Yasmine's, into something she could understand and manage. Just this morning, for instance, she had dragged Yasmine by the arm to the dreaded second-floor bathroom. Yasmine was not quite sure what she was being punished for. Looking into the trunk of family daguerreotypes did not seem like a warranted reason, but before she could begin to protest, she was locked in the bathroom she hated so much. It was hot, cramped and dark. And there was a gecko. She screamed for two hours until the sound of the lock being turned resounded against the faded marble and air rushed in through the doorway. It turned out that Dada Afra had forgotten her in there and Yunis had stolen the key and let her out. So it was on this hot afternoon that she decided they would never again be locked into a bathroom. Presently, she was searching the window for fear of a grazing shadow. The muslin curtains moved, just then, a slight ripple, a breath. It was nothing. The breeze was stealing in through the crack in the window. That was all. Still, she watched it and inched back on the doorstep out of sight. Dada Afra was not there yet but they had only minutes. They were in a hurry to hide in the blanket of shrubbery that climbed along the inner garden wall just across from the door. She had planned it all in the morning as she surveyed the landscape through the lookout window herself. The shrubs would hide them safely enough until they found the gate to the field beyond. Yasmine trotted silently across and hid behind the veil of papery magenta blossoms that the bougainvillea bush threw over the wall. She motioned to Yunis to cross over. Yunis kept his feet nailed to the doorstep. He twisted his knees inwards and rocked his bottom slightly. Yasmine had seen him do that before when, in fear of the jinn who lived in the cupboards, he had peed all over the kitchen floor. "Don't pee!" She hissed. "Yasmiiiine!" he cried softly. "Come here! Quickly!" "What if she sees? "She's watching the maids cleaning the stairs!" Yunis would not budge. His glance travelled to the window on the second floor. "How do you know the circus is really coming?" he asked. "I told you! Emad told me. He saw it! He swears he did!" "Do they have elephants?" "And tigers! And women who fly in the air with their hair uncovered!" Yunis considered this, but his glance travelled upward again. "And seals!" Yamine urged. "Do they bite?" "No. They clap!" "Do they fly too?" 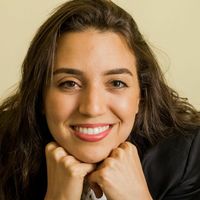