The Land of Fire and Ice ... And Elves: What I Learned in Icelandic Elf School

(This is an excerpt due to space constraints.)

Part — OK, most — of the allure of Iceland is its landscape of geological wonders. Volcanoes included. So I was both nervous and excited when, a week before my September 2014 trip to the little island country, a lava-filled mountain started to spew. Bardarbunga's eruption closed some far-off roads and made for some pretty photos and videos, but its activity didn't cause any air travel woes, unlike the 2010 explosion of Eyjafjallajökull, which sent miles of ash into the air and grounded flights to and from Europe for days.

We were safe. An active volcano was not going to get in the way of our Icelandic adventure. My friend Jasmine and I had to laugh, though; we seem to cause atmospheric changes whenever we travel. For instance, we made it downpour in a desert and shine in Seattle. But, jokes aside, we knew it wasn't us. But is it Mother Nature that causes these actions? Or could it be woodland dwelling creatures?

Icelandic folklore would argue that it could very well be elves behind these forces. Bob Wheelersburg, professor of anthropology at Elizabethtown College in Elizabethtown, Pa., says that many Icelanders believe in mythical creatures. Some studies report as much as 54 percent of the country does. The reason? It wasn't until recent history that natives of this nation moved into urban areas. After all, the more secluded an area, the more likely people will hold on to traditional and, what some would say, are irrational beliefs.

These mythical landscapes, Wheelersburg says, helped control nature. Rural people could not explain the world, so stories developed as a means of understanding volcanoes, earthquakes, glaciers and other awesome happenings. And, in the oral tradition, these stories were passed down for generations. Wheelersburg adds that because Iceland and other Scandinavian countries were so rural, there was a geographic disconnect, disconnect between fact and myth. There was no reason not to believe, he says. And so belief in elves was — and still is — common in the Icelandic countryside.

And countryside there is. Travelers to Iceland will often take the Ring Road, a 827-mile path around the island's perimeter, minus the fjords. During our autumn trip, we watched the scenery change from Mars-like to The Shire. Black ashy fields to fiery-red brush. Mossy rocks to rolling, flowery meadows. From deserted in to inhabited. Winding, deathtrap roads led us to the most alive of places. And the waterfalls. Oh, Lord. the waterfalls. And there are towns and cities, too. Dots of sheep in large, green pastures with tiny houses give way to specks of light in glistening city skylines with shimmering shorelines.

Our adventure was memorable. And too short. We began in Reykjavik and headed southeast to made our way around the island from there, staying mostly in hostels and on farms (the country is known for farmstays). Icelandic alternative and folk music iTunes purchases served as our soundtrack — until I later bought a CD at a hip record shop called 12 Tonar.

We touched ash and watched an explosive film at a volcano museum, fell in love with many flavors of Skyr (kind of like yogurt), tried the famous Iceland hot dogs more times than we can count, watched seals play among sheer blue cubes in Jokulsarlon Glacial Lagoon, went on a successful-yet-seasick-inducing whale-watching tour on a schooner in Husavik, saw the Northern Lights (albeit through a cloudy sky, but it was a milky lava lamp, and it was gorgeous) in the countryside, hung out in a cozy corner bar with Finnish exchange students in Akureyri, hiked through old lava caves and columns in Dimmuborgir (which means dark castle!), saw LOTS of sheep, bathed in the very blue Blue Lagoon, and did I mention the waterfalls? Of course, we saw some of the most-famed sites (Gullfoss, Selfoss, Dettifoss, Godafoss), but also we saw random waterfalls all over the place. But no elves.

My two friends had to move on to Prague, so I planned, in advance, a big last day for myself.

On my first day — well, only day — of Elfschool, I first went to the penis museum. After asking where I could hang my coat (on a wooden penis hook, of course), I began my trek. I thought I'd feel awkward, but science stepped in as I examined microscopic members to the ginormous johnsons of land-dwelling and sea creatures. On my way out, I talked to the founder. I was lucky to catch him; his son now runs the place because he's retired and only comes in once a week. I bought my husband a punny souvenir, giggled as I retrieved my coat from its hard-on hook and headed for fish soup at Saegreifinn, right on the Reykjavik harbor, a place recommended by a colleague.

And then it was off to school. And I finally did see elves. And gnomes. These mythical creatures were very much a part of the landscape of Headmaster Magnus Skarphedinsson's second-floor apartment, the quarters that double as his Icelandic Elfschool. Mythical creatures — and banana boxes. Dozens stacked upon dozens of sturdy banana boxes, which I later gleaned probably held the fruits of his research. Skarphedinsson studies folklore and, according to his website, has interviewed more than 700 Icelanders and 500 "foreigners" who have seen or talked with — even established friendships with — elves and hidden people.

Skarphedinsson, who studied history and anthropology in college, has been running the Elfschool for more than two decades. (He also leads the Paranormal Foundation of Iceland.) Upon arriving for class, I received a workbook filled with classic folklore tales mixed with stories that he's heard from his subjects — and plenty of blank pages to take notes.

One of my classmates asked if Skarphedinsson believed his interview subjects.

"I have no reason not to," he replied, adding that, "there is more to us than scientists say." 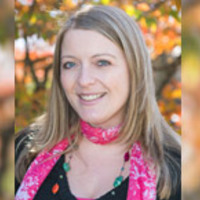 Donna has more than two decades of experience in marketing, communications, writing and media, and about half of that time has been in higher education, most recently as director of integrated communications at Elizabethtown College (2010-2015) in Pennsylvania. She speaks at higher education and publishing conferences, writes an adult learner recruiting column for Wiley, and has contributed to Currents (a higher education trade publication), Guardian Higher Education Network, The Writer, mental_floss, Games World of Puzzles, and others. Her creative nonfiction appears in The Los Angeles Review and The Los Angeles Times. She authored a chapter in mStoner's Social Works. Donna teaches or has taught about branding and digital identity in several graduate creative writing programs. She has an MFA in creative writing and an MBA.