The Great Adventures of Mr. Seraphin

Once upon a time not long ago, spoken word artist Moises Seraphin evolved. Frustrated with unsuccessfully submitting poetry pieces to competitions in hopes of being published, he shifted his creative identity and his works' purpose. As a host for many events and competitions, the 24-year-old Virginia Tech graduate would share stories -- about his day, etc., -- in-between acts. He decided to adapt this storytelling style for his own writing process, and what has transpired is a much more fulfilling creative experience. Now identifying as a storyteller, the Miami native is writing from his heart instead of his head. Using Hip-Hop's greatest storyteller, Slick Rick, let's journey through some of Moises' own life stories and visualize The Great Adventures of Mr. Seraphin. Y'all tucked in? Hereee we go. Hey Young World Although the "i" in his name is silent, Moises is quite the opposite. His nonconformity began as early as in the womb, where a life-threatening situation spawned his given name. "My mom gave me that name because of the way I was born. I was born breeched," he says. "I make a joke and tell my mom [that] I liked to stand up [since] when I was in the womb. I was ready to speak. [Also], my umbilical cord was kind of wrapped around my neck. [But] I didn't choke... I didn't drown when I was in the womb. Because of that, they named me Moises." Teenage Love Heartbreak breeds catharsis. And as an adolescent -- where trivial blunders are magnified into traumatizing experiences -- finding an outlet to channel the emotions is absolutely necessary. For Mr. Seraphin, the tragedy of an eighth grade breakup became the impetus for creative writing. "[It started with] the emotions of an eighth grader; going through the chaos of masculinity, when testosterone hits you like crack cocaine and you start to feel the unction of the spirit towards a woman. And you put a lot of your energy and emphasis... only to be rejected and denied... That's why I start writing and began to express myself on paper; to discuss the emotions I was going through. And then from there I realized that I could speak on other realistic life scenarios that I was going through." Teacher Teacher The youngest child of no-nonsense, Haitian immigrant parents, the storyteller had valuable tutelage within his household. Integral to his creative development; a mother, whom was a "great debater", that "couldn't care less what anyone thought about her opinion", he says; and a father and older siblings who played instruments like the guitar and piano. Both parents worked for the Miami-Dade County Public School system and made sure to enroll the youngster into more artistically inclined schools. Combining these elements helped foster the literary and oratory skills for young Moises' growing hobby. Having these senior influences in the household didn't deter the baby boy from making his voice heard though, as he was never the one to back down. This boldness spilled over into school as well; both positively and negatively. Small in stature (until a high school growth spurt) with an obese mouthpiece, Moises was a self-proclaimed bully to some of his classmates. "I wrote a poem about bullying", he recollects. "And it wasn't a matter of [my experience]… It was this one kid in particular that I used to bully the hell out of. I've had to make amends with a lot of people… [The poem] was a portrayal of all of those people and how they would feel." Experience is the best teacher. The Moment I Feared Having the gift of the gab can prove to be a vital skill amid hostile climates. In some cases, the ability to diffuse and prevent a situation from going bad to worse can save lives. There's a surplus of evidence in current events that speaks to heightened tension between the black male population and law enforcement. One wrong move, one wrong tone or one wrong look has snatched countless lives. One early morning, on the way to a marathon race, a fifteen-year-old Moises experienced one of these encounters and is thankfully still here to tell the story. "I got pulled over at gun point", he recalls. All I saw was one cop light; then I saw two; and then it turned into ten… [There wasn't any] 'license and registration'. They opened all [of] the doors of the car. I called my dad and told him to stay on the phone with me." The wordsmith stayed calm and quickly acted as if he was lost trying to find the race. He made his friends pull out their race packets (slowly) to show the officers. One of the officers had a wife who ran the same marathon and directed the group on which way to go. After exchanging pleasantries, Moises and friends went on their way. "No ticket, no nothing", he says. We pulled up at the next gas station, and I thought was going to piss my pants. We all hugged each other at the end." Kit (What's the Scoop?) Like a majority of twenty-somethings with college degrees, the reality of school loans supersedes the desire to make a living from the arts. Moises currently resides in Sacramento, CA, working as an Application Engineer. In his free time, he's finishing a fiction novel titled Chronicles of Love, which he hopes to complete by the summer. It centers around a poet/writer, like himself, whose "failed relationships have attributed characteristics that make him the man he is," he says. With pieces like No Ordinary Call and The Senses of an Untold Story, hopefully the ultimate story that Moises tells is a never-ending one. 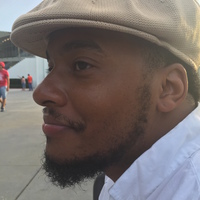