There are two kinds of people in the world: People who believe This Is Spinal Tap is the greatest comedy of all time and everyone else, those horrifying specs of inconsequential scrub, fated to live their lives in a state of slow-motion futility. I'm going to assume you're on the right side of history. One of the reasons Spinal Tap still bangs after all these years was its ability to so profoundly make fun of metal, while simultaneously delivering songs worthy of serious headbanging. Sure "Stonehenge" is totally ripping on the bad acid, guitar wank vacuousness of the 1970s, but dang that song is awesome!

Which brings us to the solo project of Spinal Tap bass player Derek Smalls (Harry Shearer), who proves that he can write songs on his own that are at once brilliant parodies, but also demand to be cranked to 11. In his album Smalls Change, Derek reflects on aspects of getting older with songs like, "Willie Don't Lose That Lumber." The album is like an elaborate inside joke for the ultra narrow demographic of "over-70 metalheads," which in itself is so ridiculous I was on board before I'd even heard a single song. Similar to his band Spinal Tap, Derek's influences are culled from a wide spectrum of rock, from upbeat thrashers to the moody orchestral masterpiece "Smalls Change." But the standout track is the final one, a nine-minute opus with extended bass and organ solos that howls nostalgic over the bygone era of men in spandex and flowing locks. "A time when all believed and none would mock, THERE WAS A TIME WHEN MEN DID ROCK!" With Spinal Tap serving as a kind of spiritual guide my entire life, I was just hoping to get a few words of wisdom when I got the chance to interview Derek Smalls, my favourite member of the legendary group. And I got that. But I got more. I lot more.

VICE: How did you go about producing a great record that is at once as good as, but also a departure from Spinal Tap? Well I didn't want to repeat myself, because that would be repetitive. I sat down to write, and of course you write about what you know. And I'm getting older. Well everybody's getting older, but me in particular, and I thought, let's write about that. I just grabbed onto the reigns of this solo project and I said, "Where will thoust take me?"

What are you trying to achieve with your songwriting? Songs like "Gummin the Gash," "Hell Toupee," "Butt Call?" I aspired in the writing of these songs to achieve the status of platitude.

And what is the status of Spinal Tap? Lower middle class with aspirations. One must always have aspirations.

You once said that your bandmates David and Nigel were Fire and Ice, and that you were the lukewarm water in between. What are you now that you've gone solo? Without Fire and Ice, lukewarm water is...warmer. After all those years of playing off to the side, I realized that I'd never gone to that part of the stage before, to the central mic, and because the lights are brighter there... it's warmer. There in the centre. And one thing that happens as you get older is that you get sensitive to cold, and I thought, That's where I belong, isn't it? Where it's warmer. So it's less luke, more warm.

Has anyone been injured listening to your music? None of my music is meant to stimulate or cause cardiac arrest. As a matter of fact I've been given that phrase to read by my barrister, no sorry solicitor, at times like this.

But would you feel any responsibility if someone did have a heart attack? If a man were walking down the street and go into cardiac arrest, would you close all streets? No, no you wouldn't. You would get help from a trained professional. Not a trained professional musician, probably not an architect either. I'd say narrow it down to someone in the medical profession. If it were me.

You recorded a series of jingles for the Belgian Milk Corp, can you tell us a bit about that? I'd said, "What am I selling here?", and they said, "Well, it's Belgian Milk, taste it." The Belgian milk, and this going to sound odd, but it did taste a bit fruity. And I don't mean that in a sexual way, but there's undercurrents of...currents in there. I don't know what they feed their livestock but I had to toss aside my preconceptions of what milk is, to do the work.

Like how honey tastes different depending on what type of flower the bee pollinated? Well no, honeybees don't have preconceptions.

Let's get back to the music. Talk about your song "Gummin' the Gash." I'm just saying that everything changes over time, and this particular act changes, and in some ways, may be better. It's a happy-go-lucky ray of optimistic sunshine, in what some would call the Gathering Cloud of Growing Older. It's an ode to joy—I don't think there's been one of those lately. Certainly not one referring to a gash.

Your ex-wife, Cindy Stang, who sings backup vocals on the record, has some harsh words for you in the last song… They are accusations without a shred of evidence.

But that song, "She puts the Bitch in Obituary," IS about Cindy Stang? Yes. It was written in what I thought was a loving way.

Is this album a swan song, or a new beginning? I wrote a song for Spinal Tap called, "Just Begin Again", and I'd like to think that I took my own advice.

What is it about the bass guitar you like so much? More bottom. 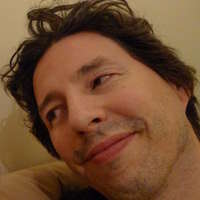 Concordia University graduate Paul Spence has worked in content creation since 2002 when he pitched a “gorilla warfare” style campaign for Vice Magazine at the SXSW music festival. Its success led to working as writer and editor for outlets like Vice.com, AskMen.com, Maxim and Stuff. In 2016, as chief content producer he was instrumental in Playboy International’s transition from adult magazine to PG13 content. He wrote and produced blog posts and videos that saw Playboy’s online presence increase by an incredible 250% in under two years. His work history includes high-profile athletes and celebrities (Vice), the tech sector (customer service and tech support for Shaw Telecommunications), lifestyle (Maxim), and the film and television industry (Fubar). Paul also has a well rounded knowledge of what’s trending and prides himself on his ...

Originally appeared in Maxim.com, accompanied by photos By Paul Spence In the 70's bikers used to... Read More