Shackles and Slavery: My time as an intern at the NMAAHC

What exactly does the NMAAHC mean to me? This building represents the combined struggle of hundreds of years of heartbreak, pain, and resilience. Since its inception way back in 1915, this museum stands as a true testament to the inherent power of the African American spirit. The building itself is imbued with the spirits of those who came before, and those spirits make themselves known in each and every exhibition. In the history galleries, I feel the pain, sweat, and fear felt by an enslaved woman who holds her child in her arms for the last time, hoping against hope that God would, one day, return him to her. I imagine the horror of the enslaved as they lay prone, below decks, in a floating prison of the white man's design, forced to live amongst the smell of human waste and death, with the ever present fear of being thrown overboard to feed sharks that grew fat on the flesh of my ancestors. I feel the sting of water hoses on the backs of innocents, and the chorus of barking dogs chasing down 'criminals' whose only crime was fighting for equal rights. I shudder at the pain of a mother, seeing her only son's face, disfigured beyond recognition, but choosing still to display his body in an open casket so that 'the world could see what racists did to her son', an action that sparked a movement and changed the historical landscape of the American Empire. I feel the heat from exploding sticks of dynamite left beneath the steps of a church, flinging the bodies of four little girls, like ragdolls, through the air in a macabre dance of death. I feel the hopelessness of a mother seeing her only son's body, left out in the cold of the street, while his killer walks free.

But what strides have we made?

I can see the mountaintop that Dr. King saw himself before his watch was tragically and prematurely ended, along with the formation of a new party, built by black people, for black people, the Black Panthers. The militancy of Malcolm X, his last name replaced with an X to represent his true name being stolen from him, runs in my blood and powers my resolve to fight. Lastly, I feel the pride of seeing one man, with curly hair and brown skin, photographed in the Oval Office after achieving the highest office in the land, Barack H. Obama, the 44th President of the United States of America. His achievement is not only one small step for a black man, but one giant leap for African American kind. My children will no longer be forced to look elsewhere for role models. They won't be limited to just musicians or football players. We as a people have come so far, and now I know that my children and I will be able to be whatever they want to become, and will stand on the shoulders of giants and bring us to the Promised Land. 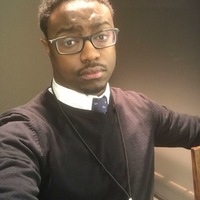 An avid student of history, dreamer, and idealist. I aim to provide top notch service that exceeds expectations.