On The Prodigal Son, Ry Cooder's first album in six years, the guitarist, singer, and songwriter leaves behind the pointed political commentary that defined a series of albums beginning with Chavez Ravine (2005) and continuing with My Name Is Buddy (2007), I, Flathead (2008), Pull Up Some Dust and Sit Down (2011), and culminating in Election Special, his intervention in the 2012 Obama—Romney race. Although politics aren't entirely absent, the new record favors songs of comfort and consolation, many of them with religious themes. Gospel music, African American and white, might seem like an unlikely turn in the career of the 71-year-old Cooder, a self-described nonbeliever. But it's not really out of character — on earlier albums he covered the gospel-blues singer and guitarist Blind Willie Johnson's "Dark Was the Night", the Bahamian singer Joseph Spence's "Great Dream of Heaven", and Mississippi Fred McDowell's "Jesus on the Main Line".

The Prodigal Son, however, centers the spiritual material as never before. They include two by Blind Willie Johnson ("Nobody's Fault but Mine", "Everybody Ought to Treat a Stranger Right"), Carter Stanley's "Harbor of Love", the Pilgrim Travelers' "Straight Street", Alfred Reed's "You Must Unload", William Dawson's "In His Care", the traditional gospel song "I'll Be Rested When the Roll Is Called" and the title track (which, by the way, is not "Prodigal Son", the Rev. Robert Wilkins' gospel blues famously covered by the Rolling Stones but a traditional number arranged by Cooder and his son Joachim). That's eight of the album's 11 selections, the remaining three being the original compositions "Shrinking Man", "Gentrification", and "Jesus and Woody", which imagines a sit-down between the man from Galilee and the "this machine kills fascists" folk singer from Oklahoma.

"The gospel music has a nice way of making these suggestions about empathy," Cooder said in a Los Angeles Times interview. It's a nice musical way of of suggesting that, of reminding people of that," he continued. "Plus, I like the songs, I have to admit. They're nice songs. Pretty. Beautiful chords, great melodies, for sure."

Cooder has said that the album grew out of his 2015 tour with country and bluegrass singer Ricky Skaggs, Skaggs' wife Sharon White, and her group, the Whites. This longtime Cooder fan caught the tour when it came to Carnegie Hall and found it an enjoyable if not entirely satisfying experience. Though the music often was beautiful and always superbly played, the show rarely excited and, with so many religious songs, its piety came to feel oppressive. The white gospel music was tuneful and sincere, but it lacked the emotional fervor, rhythmic force, and passion for freedom and social justice more typical of African American gospel. The Prodigal Son, with its blues, R&B, and black gospel, is a more varied and engaging venture.

Joachim Cooder, Ry's drummer and frequent collaborator, kickstarted the album with backing tracks he'd laid down before the sessions began, atmospheric and sometimes ethereal frameworks for the songs whose contemporary quality dispels any whiff of revivalism or dutiful reconstruction. The sonic scaffolding by Cooder fils transforms "Straight Street", recorded by the Pilgrim Travelers in 1955, and the Stanley Brothers' 1962 "Harbor of Love", making them sound entirely new. Elsewhere, Joachim makes some odd choices that turn out to be exactly right, like the eerie electronics on "Nobody's Fault but Mine" and the mbira that opens "Shrinking Man". In other ways, The Prodigal Son is steeped in tradition, as with the gloriously soulful vocals by Terry Evans (who died after the album was completed), Bobby King, and Arnold McCuller. Their voices and Cooder's guitar make "Everybody Ought to Treat a Stranger Right" and the title track shiver-inducing marvels.

Despite Cooder's professed lack of interest in making overt political statements, The Prodigal Son isn't entirely apolitical, not with tracks like "Gentrification", whose unemployed and broke narrator encounters a real estate agent who informs him that "this building's been sold to Johnny Depp/take the buyout, relocate". (As that song and a few others demonstrate, Cooder hasn't lost his sense of humor). On "Jesus and Woody", the world-weary savior, who likes "sinners better than fascists", tells the folk singer, "you good people better get together/or you ain't got a chance anymore." "You Must Unload" — a highlight of the shows with Ricky Skaggs and Sharon White — chastises "you money-loving Christians who refuse to pay your share". Perhaps Cooder's idea of what constitutes a political song is too limited, and his view of the current political landscape unnecessarily defeatist.

Speaking about the "compassion" and "empathy" he prizes in the spiritual songs he picked for The Prodigal Son, he observed that "Politics is no longer an issue, because it's dead in the water as an issue in this rubble of politics." It's easy to feel demoralized and despairing about Trump and the GOP. But amid the rubble there is resistance, and it's strange that Cooder seems not to have noticed. Maybe his next album will have a little more Woody and a bit less Jesus. 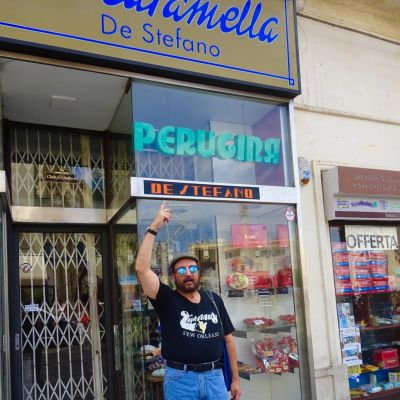 My writing has appeared in many publications, including The Nation, Film Comment, PopMatters, Newsday, Gay City News, the Advocate, Cineaste, Rootsworld, Gay and Lesbian Review Worldwide, and the New York Journal of Books. My book, "An Offer We Can’t Refuse: The Mafia in the Mind of America," explores the "Mafia myth" in popular culture. Contributor to: The Essential Sopranos Reader (U. of Kentucky Presses); Mafia Movies (U. of Toronto); Our Naked Lives (Bordighera) and the Routledge History of the Italian Americans. I also have appeared in several documentaries, including The Italian Americans (PBS) ; The Godfather Legacy (History Channel), and Beyond Wiseguys (PBS). As an Italian translator, I contributed to Italoamericana (Fordham University Press), a major volume of historical scholarship. I currently am developing several ...

Farewell to the "Father of Montalbano," Sicilian Novelist Andrea Camilleri