REVIEW OF SARAH THORNHILL by KATE GRENVILLE William Thornhill Never looked back. You heard that a lot, his daughter Sarah tells us on page one of her story. Best look forward lovey. old Mrs Herring warns her. I don't never look back. Never ever. Its advice this little "Dolly" as her family nickname will have it, will find impossible to take. Taking up a generation after "The Secret River" ended, the novel now finds the Thornhills living in style and prosperity on their three hundred acres up the Hawkesbury River. Pa, the old colonist, still seeing no need for letters, but married to Meg who insists on dainty table manners; eager to obliterate the "stain" of him being sent out and having worn the broad arrow. Thus this is in every sense a book about modern Australia and its ongoing process of reconciliation with a dark and disturbing past.. Kate Grenville excels in describing the particular stunning and sensual beauty of the Bush, but within the swoops and swirls of exultation, there is always a shiver of fear. The land is so vast, so unknown, so fathomless. Out there, by the faint drifts of smoke from faraway, "That'll be the blacks". Sarah is born in 1816. Aside from two servants, she doesn't come into contact with any indigenous Australians. The colony is still new and raw, but she does not like the name its been given, New South Wales. We wasn't new anything. We was ourselves. This rough, gutsy, illiterate little self falls in love with Jack Langland from a neighbouring family. It is not spoken of that his real mother was a "Darkie" and that Jack is half-Aboriginal. He can pass for Portugee. "Still want to marry me Sarah Thornhill?" he asks her every time he returns from one of his sealing trips to New Zealand. Indeed she does. Their love is intensely evoked in strong and simple language ' It was like a hunger or a thirst what I felt for Jack. Not nothing in your power to say no to" When her brother dies at sea, Pa insists on Jack bringing back his grand-child, a girl Will had fathered with a Maori wife. This incident is carefully reconstructed from a chapter in Grenville's own colonial family history, and as ever, she adroitly weaves fact into fiction, as a means of resourceful reflection. Like so many children from "The Stolen Generation" this girl "Rachel" unplucked from her roots, withers away, most painfully, from death of the soul. Later, when Sarah has her own baby, she appreciates what she had begun to apprehend about Rachel. That "My mother's mother must be in there too. Her father. And Pa's mother and father. Never thought til this moment of Pa having his own pa and ma. Further back even, a pa and a ma beyond him again. All the people that had gone into her making were part of her" There is no Never look back. The past infiltrates its way into the present as surely as the river rolls. William Thornhill's shame, deeper and more indelible than his original convict stain, is passed onto Sarah. A terrible secret, so awkward and unwieldy that she cannot carry it alone, and she falls ill. Despite the fragile serenity she had begun to earn as the wife of Irish settler John Daunt, she cannot succumb to the agape they have grown into, without some means of making amends. In a stunning finale, the complex creature that is Dolly/Sarah Thornhill/Sarah Daunt ventures with Jack to New Zealand, to lay Rachel's spirit to rest amongst her own kin. Made almost radiantly aware of her own mortality, her smallness in the great scheme of things, she hands on the truth, which is to be her salvation "But of all the crimes done, the worst would be to let the story slip away". Kate Grenville won't let the story slip away and she won't allow us to Never look back. In the trilogy that began with "The Lieutenant" through "The Secret River to "Sarah Thornhill," she always brings a rich luminous intelligence to her writing. Without flinching at the atrocities of white settlement, she takes a full look at the worst, through the eyes of characters who are fully credible and convincing. Like a bird, she soars over Australia, celebrating its magnificence, even as she zooms in and pecks away at its thorny crevasses. 738 words. Kate Henderson 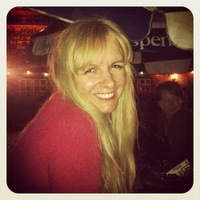 A highly experienced, award-winning writer with a strong background in film and television drama.