I had already been living in Ghana for five months when I stumbled upon the palm wine operation in the jungle. Long gone (but definitely not forgotten) were the extensive wine lists, craft breweries and Old Fashioneds of my former life in New York. I was now living in a small shack, teaching on the extremely remote coast of Cape Three Points in Ghana's Western Region. The isolation was tremendous. However, with this quarantine in paradise came a much healthier version of life than I had in New York. Long beach runs, epic lengthy swims and surfs became part of my everyday routine, and my journey had so far remained dry. Not long after I arrived, however, I decided to make the trek to the only other manmade structure on the beach: Escape Three Points Lodge, a small ramshackle bamboo bar tucked back into the trees. That night, the owner, Akwasi, introduced me to akpeteshie, the local spirit. It roared like a bush fire down my throat. As overwhelmingly strong as it was, however, it felt like reuniting with an old friend. As the months wore on, I worked my way through Akwasi's enormous range of naturally flavored akpeteshie. Certain flavors helped punters to stay up all night, others guaranteed strengthened "manhood" for the entire evening. Mango hot pepper, vanilla, and lemongrass remained my favorite until the end. So where did this gloriously strong spirit come from? I was soon to find out. It was late in the day and I was strolling down the red dirt road, to return a bicycle to one of my students who lived in the village half an hour away. I knew this road well, the dense jungle on either side dotted with plantations of cassava, banana, coco yam, and plantain. The old women carrying impossibly large bundles of branches on their heads. Farmers with enormous cutlasses coming from a day of work on the farms. The gangs of small kids in varying stages of undress yelling out "Obruni! Obruni!" (White person!) as I passed by. It was just a hole in the trees and I walked past it, not thinking anything of it, but stopped and backtracked when I registered what it was. I had seen the aftermath of these palm wine operations before: palm trees (usually Raffia palms) like fallen soldiers after an ambush, charred plots of earth with a plastic fuel container or two, lying forgotten among the ruins. But it wasn't until then that I got to see an operation in full swing. I walked through the trees with caution, unsure how I would be received. Luckily, I was given the solemn nod of approval, and the workers proceeded to take me around and show me the process. The main fellow explained that the palm tree is felled, then tapped by cutting out a small portion of the trunk, like a rudimentary canoe. The palm wine (the sap, which is locally called nsafufuo) begins to flow almost instantly, unfiltered and untreated. The trunk is sometimes burned to expedite the flow. It can be drunk like that, and often is sold roadside as a refreshing nonalcoholic beverage, cloudy and sweet, similar to coconut water in taste. Leave it for a day, however, and the fermentation process is already well underway. The bottles are now ready to burst with fizzy palm wine, the alcoholic content varying from a light beer to vodka depending on the duration it has been left. For the most part, the palm wine is collected in large drums to be distilled and turned into akpeteshie, the fire water of various flavors that I had come to love. I looked around at the various smoking barrels and tubes dripping with akpeteshie with keen interest, until I felt as if I had overstayed my welcome. I got ready to go, and thanked them for their time, but the main guy stopped me and frowned. "But you must try." He motioned to the bucket filled with fresh palm wine. I shrugged and took a mugful. It was delicious, and I said as much. "Now you try this." And it was then he smiled and produced a plastic water bottle. He poured a large amount of it into the mug and passed it to me. I smelt it and made a show of how strong it smelled. The guys had all gathered round now and were grinning from ear to ear. I threw the shot back and let out a satisfied "aaahh" even though my throat burned. It was met with cheers and back slaps. I could have been anywhere in the world, enjoying the sense of camaraderie that doing shots tends to bring. Yet here I was in the jungle in Western Ghana, drinking with the fellows who had felled and tapped these trees and turned its sap into this eye-watering spirit. I thanked my new friends, and with a fire in my belly and a new-found lightheaded feeling, I smiled dumbly to myself as I walked, slightly drunk, through the jungle. 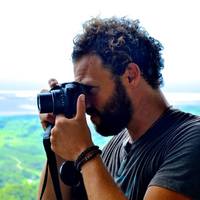 I had been dry for two months by the time I first tried kava. I was traveling in the South Pacifi... Read More

As I bumped down a dirt road in West Africa for the first time, I wondered what I'd gotten myself... Read More