Once an artist reaches a certain level of technical competence their focus becomes one of flavor. Jim Carroll, who died Sept. 13, was the flavor of Manhattan Island at a time when they could not give it away. Yes, Carroll's apprenticeship unfolded in the halcyon days of Warhol, Edie Sedgewick, The Factory, and Max's Kansas City. But his specific era of sway was the late 1970s and early '80s. At least that's what he tasted like. The poet's heyday does not seem so long ago to this scribe, which makes his death at 60 the more striking. Carroll's work and personality were branded by downtown's ragged districts, and Greenwich Village, when they were a low-rent melange of Italian-Americans, factories, and freaks. He was one of those freaks by choice. Or at least it would seem. We are not talking facts here. We are talking flavor. His haunts were the abandoned industrial sites of a machine revolution gone south, or Far East. Punk, that avenging black army of spoiled children, had taken over the factory warrens and turned them into seedy soundstages and impromptu galleries. Its music and related events, its spirit, had so shaken the foundations of rock 'n roll's royal houses that the Rolling Stones quit the jet-set, moved into town, and wrote a song that captured the thrilling mess of it all... Shattered. With a friend, an Iranian emigre who split Tehran during The Shah's downfall, highwayscribery went to see the crystal ball drop in Times Square on New Year's Eve. It was madness, pornography, knife fights, beer cans in raw red hands, roving bands of black youths looking for trouble, the ghost of Herbert Hunke; the anarchy John Lennon so loved and which would kill him a year later. We saw Carroll there. Or we didn't. The poet's "Basketball Diaries" were hot then. Or maybe not just yet. Again, we are talking flavor, not fact, and these events and sensations are what the name Jim Carroll said at the time. Stones guitarist Keith Richards took a liking to Carroll's work and the poet read his punky screeds to the accompaniment of the famous rocker's hot licks and to the kind of audiences others of his craft can only dream about. Shadooby. highwayscribery did not have a book of Carroll's poems nor had he read the famed diaries, but he knew of him because, if you were young in the New York metropolitan area of those times, it was understood you damn well should. With George "Rasta" Powell, the scribe would comb the crowds of Washington Square for kicks before heading down to St. Mark's Place where Richards owned a dive, The St. Mark's Bar and Grill. We saw Carroll there. Or we didn't, but we could taste him. Moved by his ever-presence, the highway scribe bought Carroll's album, which was streaked with essences of Lou Reed and the New York Dolls. It was a great thing, this musical spoken word, this idea of the writer-rocker. You could not listen to it 'round-the-clock, but it reeked of invention and daring. "People Who Died," is the piece that sticks out, endures. A story about tough kids of Irish or Italian pedigree who ended up bad in the streets of Queens or the Bronx or Brooklyn, it conjures a time when being born white was hardly a guarantee of success or survival. "They were all my friends... And they died!" This was how highwayscribery, for better or worse, came to poetry. Not through the big "Dreamsongs" book of John Berryman, or by way of W.H. Auden or Sexton or Merwin or Lowell. It was through the verbal gymnastics of Allen Ginsberg on a Clash album, or the Clash themselves, or Carroll. Shattered. Maybe it was not the best path into the worlds of verse and vision, but it was a way. And next came Rimbaud because there was another band from the same milieu called Television whose leader had the last name Verlaine, just like Rimbaud's lover, Paul. There was, in that time, something of an effort to sell Rimbaud as the "first punk" to a new generation living "A Season in Hell" all its own and, in highwayscribery's case, it worked well enough to set the hook. Shadooby. The New York we write of here is mostly gone, the dark adventure of Times Square replaced by ESPN Zone and a lot of hum-drum security. With Carroll's death the danger recedes a little further into the past and, 40 years from now, it will be up to his written work to conjure it anew for those unborn. Dead poets work, too. He carried the seed of that dangerous Big Apple in his heart, chewed on it, and spit it to the sidewalk where it might be frozen by a ghostwind whipping off The Battery. 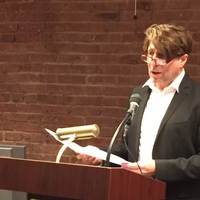