Our Bodies Tell Stories, the Good and the Bad

I have this scar on my knee from when I was a kid and our psychotic cocker spaniel, Sebastian, dragged me down the street in pursuit of a cat his own size. I wrangled the dog to a halt 20 feet later and limped back home. My 11-years-older brother was in the backyard with a friend. He was a young adult living at home with free rent in exchange for being the responsible adult while our mom worked. That would have been great, except for the fact that both he and his friend were high that afternoon. His friend, a mom who lived next door and supplied the cocaine, gave him instructions for cleaning the huge mess that was my knee. Being a mom of two children around my age, she knew about taking care of kids' injuries, or so he thought. She said to use hydrogen peroxide and a scrub brush in the shower. It was excruciating, but it might have been less so if he hadn't been under the influence of a drug that made him scrub the flesh so industriously. There was no doctor visit, no gentle nurse, no proper wound care. He loved me and had the very best intentions, but the original injury was made far worse by his treatment, and the resulting scar was hideous. People noticed. Our bodies tell stories. Internal stories. Mental health stories. Physical stories. Some are short stories like an end-of-summer tan from afternoons on the beach. Some are novels about the 38 hours of back labor and the C-section scar at the end. Some are secrets, shared in intimate moments, while others are visible to strangers passing by on a busy street corner. Some are haiku—succinct, yet bearing the weight of a thousand words: drug addict brother's good intentions scar for life it's here and he's gone I grew up with that scar, gross and puckered and pinkish-purple. Eager to heed my brother's fashion advice (his jeans in high school had "fashion victim" written on the back pockets in black permanent marker, so clearly he was a 1980s style god), I covered it with long skirts, opaque tights or jeans. In hindsight, that advice was likely tainted by guilt. The scar shaped what I thought about my body and how I now mother my kids' wounds. They have no idea what peroxide and scrub brushes feel like on shredded skin. No one has removed their splinters with a pocket knife. No caregivers high on drugs. No cocker spaniels. Every few years, my brother would go through a phase of using drugs beyond his benign pot habit. The last one killed him because he chose to smoke crack with his boyfriend instead of taking his antiretrovirals. He eventually ended that relationship and got clean in time for a year of AIDS-related cancer treatments, but it couldn't undo the effects of certain life choices. Watching him die young (15 minutes after I told the nurse to make him comfortable with more drugs) became part of my story. My grief became part of my children's stories. Likewise, we begin life arising from our parents' stories. We're the reason our parents, biological and adoptive, are parents at all and have smile lines and gray hair. Who we become is descended from their childhood experiences both good and bad, their successes, or the caution and gentleness they learned after a terrible accident. All of it contributes to one collection that is each of us. But no one is merely the sum of a sibling's mistakes, a parent's rough childhood or even their own poor choices. Somewhere along the way, we have the opportunity to understand that while we can't rewrite what has already happened, we can choose how the present unfolds into new chapters of positivity. The scar on my knee faded and became just another thing that had happened in my life, like the many stretch marks one has after three babies or getting a second ear piercing on my birthday. I sort of forgot I had a scar until an artist friend asked me about it this summer. On a day that hot, any reasonable person would wear their shortest shorts and not care how much leg was visible. I laughed and told her the story. I got to the part about the peroxide and frantic scrubbing, and suddenly she grabbed her phone and snapped a photo of the scar. I hadn't looked at it in years other than while shaving or bathing. She was struck by how beautiful it was as an abstract image: a person joyously leaping through a circle of flames. Maybe that whole-knee scar is now somehow beautiful, and maybe it isn't. Regardless, my daughters and son see a mom in short shorts revealing scuffed-up knees and laughing with a friend about the time a little dog thought he could win a tussle with a Garfield-esque feline, and my story adds to theirs. 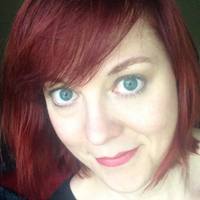