New Developments In the Fight to Vanquish Cancer

Cancer is often considered a four letter word (though it obviously has a lot more letters than that). However, it shouldn't be a taboo subject as, for many people, it is a frightening reality. Many individuals consider cancer to be the "disease of modern man." However, this simply isn't the case. In essence, cancer can be considered an example of evolutionary pressure within an organism, and while cancer may be occurring at faster rate in modern life, unfortunately, it is just as natural as an apple tree. In humans, a cancerous tumor is made up of hundreds to thousands of cells which contain various mutations, some of these mutations will be advantageous and some not. However, overall, the mutations in a cancerous cell have given that cell a survival advantage. In the event that a tumor is malignant (cancerous, spreading), the mutational advantage is so extreme that the cancer cells (if not treated) can grow out of control, spreading to other parts of the organism with life threatening results. Cancer is not literally evolution; however, some scientists have suggested that seeing the mutations as small-scale evolution may increase our understanding of how cancer works. A recent publication in Nature Genetics highlights how science targets the mutations in cancer which are otherwise advantageous, and the mutations which arise to induce drug resistance. The researchers identified a pathway which, they propose, may be partially responsible for a common drug-resistance in cancer. BRAF is the name of a protein that is important in a multi-step survival signal in cells. When BRAF is mutated in cancer, the pro-survival signal becomes over-active and cancer cells may be able to ignore signals designed to induce cell-death in sick cells. BRAF inhibitors (drugs used to treat this form of cancer) block the over-activity of BRAF, and the natural ability of the body to kill cancer cells is restored. However, due to the adaptive, evolutionary nature of cancer, the cancer cells can sometimes compensate. Therefore, targeting resistance in cancer is important to successfully, and safely, treating patients. Scientists have begun to explore the theory of synthetic lethality to target drug resistance. "Synthetic lethality"is a method of targeting two or more (usually unrelated) genes, or pathways, in order to cause cell-death, or apoptosis, in cancer cells. A series of experiments identified that, in cells with mutations in BRAF, there are increased levels of YAP1. Furthermore, when cells change, and become resistant to the BRAF inhibition drugs, many of those cancer cells started producing even higher levels of YAP1. What does that mean? These researchers have identified a pathway of redundancy, which a mutated cancer cell uses to escape chemotherapy. An increased expression of the second protein, YAP1, can allow a cancer cell to escape BRAF-inhibition death. In cells where resistance to either BRAF inhibitors are present, the researchers were able to restore the lethality of the chemotherapy drug without causing a statistically significant effect on the unmuted (i.e. healthy) cells. By targeting two, not directly connected pathways and proteins, researchers were able to combat a form of "cancer evolution" that has been seen in real patients. Scientists tested their results both on cells in a petri dish, and grafted tumor cells. They report that treatment with the BRAF, while targeting the compensating-YAP1 protein expression increased the lethality of the drugs. So the drugs once again, became effective to target the cancer cells. This is not the first example of synthetic lethality, or redundancy to be found as a potential way to fight cancer. Not by a long shot. But, it is a good example of how synthetic lethality, and the theory of "evolutionary cancer" can work together to help doctors treat cancer in the future. And more immediately, these results are important for many patients. For example: another protein that is part of the same pro-survival pathway, known as Ras, is very common and currently, drugs have limited effect on Ras cancers. These primary research results may lead to an effective method to target Ras positive or BRAF positive tumors. Each result that identifies a new pathway of synthetic lethality could increase the prognosis, treatment, and quality of life for hundreds, thousands, or hundreds of thousands of people. Cancer may be a natural result of evolution, and thus there is no ONE cure. But if we are smart, our methods to treat cancer will evolve faster than cancer. 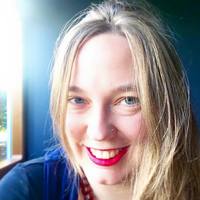 I am passionate about the future of scientific research and science writing. I aspire to promote a better understanding of the scientific process, and current scientific discoveries to the public, while promoting the direction of scientific inquiry. I previously completed my Master's Thesis in Biomedical Research, with an emphasis in Cancer and Genetics. I completed my research at Dr. Lawrence Goldfinger's lab at Temple Medical School in Philadelphia. My independent research project was primarily centered on cellular signaling and iso-forms of Ras protein. Ras mutations are prevalent in an estimated 20-30% of all human cancers. I am a passionate, enthusiastic writer. I have contributed publications online science blogs, my university newspaper and literary magazine. I also maintained a travel blog, and can provide technical, casual ...

Let's Face it: ArtCam Insignia 3D Model from a Photo

Delcam is a CAD/CAM software company originally founded in the UK in 1977. It has since been acqu... Read More

The Ras superfamily consists of over 150 members including the well-known: H-Ras, K-Ras and N-Ras... Read More