The Nest Cam Outdoor security camera is one of the most popular choices for an outdoor security camera and shows up frequently on most recommended lists. If you're a frequent reader, then you know how much import we place on research. The next logical step was to test one out for ourselves, so I had a Nest Outdoor Camera sent my way and spent two weeks exploring the ins and outs of the camera and its functionality. Read on to find out more about my experience as well as read other consumers' Nest Outdoor Camera reviews.

View on AmazonThe Nest Cam can be found on most online retailers and in many big-box stores. A Nest Cam usually runs $199 for a single camera or $348 for a two pack, but does go on sale from time to time. Below is a sampling of prices at stores that currently carry the Nest Cam.

The Nest Outdoor Cam is one of the highest-resolution cameras I have ever seen. Here are a few of its tech specs:

A note on the upload speed requirement: I have the basic package from my internet service provider. While the average user won't experience any difficult streaming from the Nest, I'm an avid gamer and Netflix user. I've seen increased lag and buffering times since installing the camera, so heavy-duty internet users will need to prioritize their bandwidth use within their router or improve their upload speeds.

The Nest left me with a great impression right out of the slightly dented box (something I blame on the delivery company). The packaging was neat and minimalistic , without a lot of unnecessary plastic to cut through. The reusable Velcro wire tires were easy to open and allowed me to place anything I didn't need back into the box. The way Nest packs its screws and attachments was genius, and in my opinion, perfectly organized. I had no difficulty finding all of the parts , and the included manual provided a handy list of what to expect.

The Nest Cam feels good. It's heavy and made of high-quality plastic , and the wires are thick and not overly flexible. There is a sense of durability surrounding the camera, and just the feel of it makes me believe it's completely weatherproof. In fact, the camera has an IP65 rating , which ensures protection from dust and low-pressure water jets (like garden hoses).

Installing the Nest took less than an hour from unboxing to recording. If you have a metal surface outside, you can mount the camera without using screws and instead use its magnetic base to keep it in place. If you want to mount the camera to a wooden surface, you need only two screws (the package includes multiple screws) to attach a magnetic plate for the mount. Once the mount is in place, the camera fits securely in it while still providing a generous amount of room to adjust the angle.

My area has had a rash of car break-ins lately, so I placed the camera in an upstairs bedroom window overlooking the parking lot. The instructions recommend against placing the camera in direct sunlight, but I haven't encountered any problems as a result of doing so.

The next step is to download the Nest app and create an account. Account creation requires an email address and a password with at least eight characters using a mixture of uppercase letters, lowercase letters, and symbols. Make sure you allow notifications on your mobile device, or else the app won't be able to alert you when it detects activity.

Then you enter your address and a name for the camera's location. I chose "Backyard" for mine, but it can be anything you want. The app uses your address to autofill other information as well as to keep you informed about the weather and temperature at your home when you're away.

After you have named the location, look for the "Add" option in the app. (The instructions say to search for "Add Camera," but the options have changed.) Allow the app to access your phone's camera, then scan the QR code found on the underside of the Nest Cam. It will make an audible "beep" when connected, and you should soon see the livestream from the camera.

It may have just been my bandwidth (or lack thereof), but I noticed around two seconds of lag in the stream. I also had some difficulty picking up the live feed, but I had two other Wi-Fi devices placed beside the camera as I was setting it up. This may have led to interference.

Read the full review by following the link below. 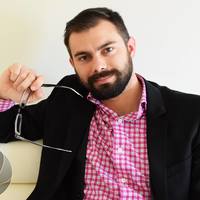 How to Use Smart Home Technology to Improve Your Home's Value

Smart Homes and Energy Savings: How to Boost Your Score

According to the Energy Information Administration, the average homeowner spent about $114 per mo... Read More