Except for a few neighborhoods, gentrification and tourism have touched most of the five boroughs of NYC. But my neighborhood, Prospect Lefferts Gardens, is a haven in an increasingly Disneyfied city.

The only tourists that come to Prospect Lefferts Gardens (or PLG as us locals call it) are the ones who've mistakenly made a wrong turn at the nearby Brooklyn Museum or Botanical Gardens. Starbucks tried to open here once, but the neighborhood said, "Hmm…how bout not."

Yet, like every neighborhood with the perks that mine has (express subways! Right by the park!), PLG is going through some changes. You still hear Haitian Creole spoken in the streets but it's mixed with someone blaring Björk in their car.

Every year a few more subway-tiled wine bars, trendy bakeries, and overpriced smoothie stands find their places between the old Ital restaurants and botanical shops. And like most neighborhoods on the cusp of gentrification, there's the good, the bad, and the stuff that's been here so long you hope it never leaves.

Here's some of them.

When I moved to PLG, most of the neighborhood hailed from the islands of Trinidad and Tobago. I'm not sure if that's the case anymore but if all the Trinis ever up and leave, I'm out of here. PLG is known for its hole-in-the-wall Caribbean eateries, which allegedly rival the ones in the Caribbean itself.

De Hot Pot has plenty of Trinidadian and Toboggan staples but my favorite item on the menu is the doubles. Doubles start with two rounds of fried dough (I know, awful, right?). A chickpea mash is spread on the dough and topped off with two sauces: one sweet and one spicy. The best part is that De Hot Pot doubles only cost $1.50 each.

Order two, and take 'em to Prospect Park to wolf down with a Solo. Now, don't go telling all your friends about this place because it's my fave and I don't want the prices going up.

But don't go not telling your friends either; when gentrification does completely take over, if De Hot Pot gets replaced by a Duane Reade or a record store, I'm blaming you.

A busy day at Peppa's! Photo by Website / thefader.com

Another hole-in-the-wall neighborhood fave, Peppa's cooks up some of the best jerk chicken in the city.

You can get half a chicken here for $5. Sauce is free. I forget what rando chain restaurant is known for the tagline, "finger-lickin' good," but they should immediately drop it so Peppa's can use it.

The jerk spices rubbed all over the bird make that crispy skin so flavorful. You'll understand why the sidewalks in PLG are covered with chicken bones; bones that have been licked completely clean. True story.

This is the outside of an awesome bar. Really. Photo by Website / dnainfo.com

The laundromat awning above the entrance makes you want to think it's a speakeasy, but you know it's way too cool to call itself something that trendy. Drinks aren't cheap (around $11-13), but they're still cheaper than the ones in Manhattan.

Plus, with cool names like 'Donkey Kong' and 'You Say He's Just a Friend', you can get a bit of free entertainment while you get your drink on.

As far as I know, we don't have a Middle Eastern community in PLG but we have gotten an outpost of the local Israeli restaurant Kulushkat. You can get falafel and shawarma at pretty much any halal cart in the city; it won't be as good as the Mediterranean spread here.

The falafel is crunchy on the outside and soft on the inside. The pita is so damn good, I want to rub it on my face. I know that's a bizarre way to describe pita but it's the truth: it's so spongy and soft, it feels like a pita and an English muffin had a secret love baby, and that love baby was born to soak up pools of spicy zhug.

No booze here but you can get a homemade smoothie or tea.

Someday, when I'm rich like Gwyneth Paltrow, I'll come back to the neighborhood and eat dessert and drink cocktails at Butter & Scotch every night.

Famed food writer David Lebovitz called Butter & Scotch his, "happy place," and now you know it's mine too. The brownie sundae is ridonkulous. A steamin' hot brownie, topped with two scoops of creamy vanilla ice cream and covered in sticky chocolate sauce. Their Hotline Bling Cake is a slab of chocolatey goodness that's drizzled with caramel and dusted with gold.

They also serve birthday cake here. Even if it's not your birthday. Like all my favorite places, Butter & Scotch serves cocktails in fancy glasses, all with cool, femme-forward names, like 'Bow Down Bitches' and 'Feelin' Myself'.

There's also boozy milkshakes. Anytime a very adult thing (like alcohol) is mixed with a very nostalgic thing (like milkshakes), I'm all over it.

Butter & Scotch only has three savory items on the menu: gruyere cheese puffs, flavored popcorn, and nachos. But when you're only eating salty to balance out all of that sweet, what more do you need? 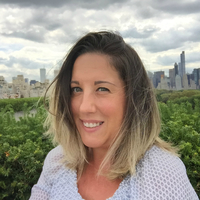 I've been a freelance writer and editor for the past 20 years. Over that time, I've worked with clients such as LivingSocial and Rearden Commerce. I specialize in travel and lifestyle, real estate, marketing, finance and entertainment writing. I'm also a NYC tour guide, which makes me an expert on NYC travel, culture and neighborhoods.

5 Ways Traveling Completely By Myself Cured My Codependency