I Went Vegan and Didn't Tell Anyone

I want you to say the names of your vegan friends aloud in your head.

If your first thought was, "I'm not sure if I have any," then you don't. You would know.

There's nothing wrong with choosing to be vegan, whether for health or animal welfare reasons. I was vegetarian for about a year; it's not difficult, and I was exposed to some fantastic foods I still seek out even though I'm a dirty carnivore.

This week will, however, be a test of mental strength. Can I make it as a vegan through the work week without telling a single person?

The first test was getting coffee with a coworker, and he asked if I want the creamer. Crap, already? I almost started sweating… How could I do this? "No thanks, I'm sticking with black." Crisis averted.

Monday afternoon I drove a friend home, which was about an hour drive. He made a passive comment about getting hungry. I lied and said I ate before I picked him up because frankly I don't think there are many vegan options in his city.

I went grocery shopping, and ended up cooking dinner at the same time as a roommate. She commented on my fake meat reminding her of when she was vegan, opening a golden opportunity for us to bond on this common ground, but I went with "I bet… I just like this stuff."

That same roommate is not vegan anymore, and three times asked if I wanted to eat buffalo chicken dip on Tuesday night. I changed the topic three times.

By 9:00am the buffalo chicken dip got brought up twice again. I was forced to lie and say I'm excited for it. I also woke up with the urge to do some exercise. Maybe yoga? Do I have to do yoga? Is this just who I am now? NAMASTE BITCHES.

I thought I would have to blow my cover when somebody commented on the salad I was having for lunch… I mean, wouldn't they want to know about the great vegan chicken substitute I had on this thing? After a nervous laugh, I was able to go with "It sounded good!" It was.

Evening rolled around and I was going to come face to face with that buffalo chicken dip, along with having a few friends at the house. I grazed on the vegetables brought, which I believe made people assume I was also dipping them. It got a little tough when we watched the movie "We Need to Talk About Kevin" (10/10 for the record, Netflix that and feel weird about life), because all I could think was, "You know what else we need to talk about? The plight of animals slaughtered for your greedy consumption, you gross monster humans."

Wednesday meant a team meeting with four co-workers, and we usually end up talking about food because it's right before lunch.Being the day before St. Patrick's Day, we talked about corned beef and the best places to get it. Again, I could tell them about how corn is good on its own and you don't need to go adding beef to it, but have you had corned beef? It's the best.

I spent time with my sister in the afternoon. I didn't tell her what my next post was going to be, and nothing notable happened. This is just included because my mom reads my work and she likes to see that I'm friends with my sister.

I was a little worried about Wednesday night, knowing it would be the most time this week I'd be around two roommates at the same time. I successfully deflected two requests to go to Taco Bell (we get along very well as roommates), and stuck to cooking my normal #vegandinner.

My cover was almost blown when one of them asked if I was doing "vegan or something this week" and before I could say anything the other roommate said, "Maybe it's a lifestyle change and you should support that." This is the moment I learned that if you lie to people enough, they will start lying for you, and that's pretty fantastic.

I knew coming in that Thursday evening would pose a challenge. It's normally the first night of the week I eat like absolute garbage, and it was St. Patrick's Day, an overly Americanized holiday with deep roots in "any other name than weekday drinking."

I deflected suggestions of pizza or other frozen treats and made a #vegandinner for two- I had successfully conned a roommate into eating a vegan meal! Is this part of my evangelism as a vegan now? Am I doing it right!?

Bud Light is vegan, which I had to double check on PETA's website. Drinking beer then losing your roommate's money on keno is also vegan. Coming home and not drunk snacking? Vegan.

Joke's on you friends, I only have four day work weeks. I was dog sitting for my sister, and she brought me a full non-vegan breakfast with the dog at 6:45am.

If there's one thing I know, it's that when you are slightly hungover and somebody offers you free breakfast, that's a perfectly alright time to give up on your dreams. Back to team #meat. 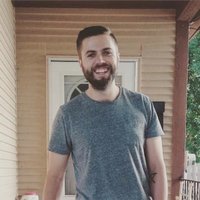 Hello! I'm Matt, a marketing communications professional and freelance writer. I have 5+ years professional nonprofit experience including consulting, event planning, marketing, communications, and fundraising. My freelance career has included a range of crafted content such as web articles, blogs, website content, social media campaigns, and white papers. Industry-wise, I have published pieces for organizations in the medical/healthcare fields, international technical/industrial groups, law firms, auto dealerships, tourism, and much more. I believe in strong communication, remaining flexible to meet changing demands throughout a project, and delivering publish-ready pieces that meet your needs. On a personal level, I'm a big fan of the MLB, music and going to concerts, finding funny things on the internet, and exploring the outdoors...

Woodworking is both one of the oldest trades and art forms. Whether you are crafting in your pers... Read More

What You Don't Expect After Weight Loss

With the weather turning and all eyes on warm weather activities, many people are working on thei... Read More