I believe we have a screw loose

I believe we have a screw loose

Before I resigned, I worked as a political correspondent for 8 years, and went to the Guangzhou People's Court every day for 3 years. Sometimes the court sessions for a criminal case would last for 2 or 3 hours, and then after a few months they would take 15 minutes to announce judgement. I saw a high level drug dealer risk everything in court to protect his wife. I saw lovers escape from blame by maliciously attacking each other. I saw an African man sentenced to 10 years in prison for bringing in hundreds of pornographic discs, the translator told him the prison term several times but he never dared believe it. When he finally did believe, he cried out. He let out a little whimper like a small animal.

I don't know why the court's air conditioning on so low, the female journalists all wore long-sleeved shirts. The pale-faced people sitting in the corridor were either the defendant's or the victim's family. I didn't know how to interview them, so my drafts always lacked details. All kinds of fragments and tatters overlaying each other. It made me remember that the court will always be an ice-cold place. I never anticipated that after several years I would come to think that at the very least this ice-cold would be capable of exposing the reality of this world. At the very least we Chinese journalists, who do not know what to do stand around looking on, could slowly touch this ice-cold world. But within the firewall we stay quiet and silent.

Altogether I reported on National People's Congress and Chinese People's Political Consultative Conference five times. In 2008 I was on site for the Premier's news conference. Even though we started queuing outside The Great Hall of the People at 6:30am, my colleague and I only just scrambled to stand by the very back seats. Premier Wen Jiabo's voice came to us from a distant place. I remember the final question, the Premier expressed his wish to set aside this opportunity for a French journalist, then the Reuters journalist stood up, said that a person called Hu Jia (a PRC dissident and human rights activist) was now on trial in Beijing. His criminal charge was "incitement to subvert state power" (a criminal charge used to gag free speech). This was the first time I had heard this name. A month later Hu Jia was sentenced to jail for three and a half years, and during his 3 years in jail, I got to know his wife and his daughter. Our homes in Tongzhou were only separated by a canal, and they often came over as guests. The first time the little girl came to my house we ate Meng Long ice. She liked the cola chicken wings and honey-roasted wings I had made, while we grown-ups were talking she took it upon herself to learn how to shell melon seeds. One summer I bought a beautiful white cotton skirt for the child. The smallest size was still too long, so her mother hung it in the wardrobe. Every so often she'd go to her mother and say "Mama Mama, I want to see the wedding dress Auntie bought for me."

To begin with she believed the story that her absent father was "going to school", but she gradually became suspicious. However hard we tried, we grown-ups could fabricate a world of only Maidou and Garfield. Small children grow up too quickly, I don't know when she learned to use the phrase "domestic security" and use it so often. The first tear had appeared in the fig leaf we were using to cover up the real world. After that we couldn't stop everything coming out in front of the child. Now she's gone to Hong Kong, I am happy that she can push open the window and see all the way to Victoria Harbour. They're aren't black vans waiting downstairs now. No men in black suits. Those people we call "domestic security".

I took me a little while to accept that "they" truly existed, and were not part of a clumsy plot from an Eastern European or Soviet film. Even though I had already seen a few of them, they are always fuzzy and vague in my heart. I imagine that each and every one of them is only a screw turned especially tight, because it has been turned too quickly and in confusion has changed direction. They do not really know their own position. If they live as a screw for very long, the work will make them lose their sense of ethics. On Christmas Eve night 2009, a few of my friends came to spend it in our home, we teased them for being in such an "uber" situation. Two domestic security drivers had delivered them downstairs. That day Beijing got so cold it was close to -10 degrees, and it was blowing a level 5 gale. My family and I thought about inviting them up, after all in the house the balcony was sealed and the heating was on, there was also a useful electric fireplace, the false flames could bring a real warmth. When everything was warm, maybe a screw would find themselves soft-hearted.

To read the full translation of Li Jingrui's work, go to https://florencehood.contently.com/ 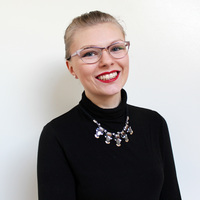 I am a writer and translator based anywhere with good wifi. I help companies create interesting and original content, as well as translating English-Chinese and Chinese-English. I write educational content and training materials, publicity materials, and website content. I also write creative content. I’m starting to translate Chinese sci-fi and loving every minute of it. When I’m not on my laptop, you can find me rock climbing, reading, eating and exploring. Want to work together I’d love to hear from you! 我自由职业作者和译者。哪里有好网路， 我就工作。 我替公司写有意思的又独创的内容。我也翻译中文到英文，英文到中文。 我写着教育内容，培训材料，宣传材料和网站内容。我也写创意的内容。我开始翻译中华科幻。那是我的最喜欢的。 不跟电脑打交道电脑的时候，我攀岩，看书，吃饭，和探险。 要跟我合作吗 我希望你加入我!