How to Make Creme Brulee

Anyone who uses the term "plain vanilla" as a pejorative has clearly never eaten a really good creme brulee. This simple and classic dessert gives good vanilla a rich but understated backdrop that shows its natural complexity to good advantage. They're surprisingly easy to make, once you've mastered the basic technique. Work with the best vanilla you've got -- ideally, a vanilla bean -- for a superior result. The Ingredients Despite its surprisingly light, clean flavor, creme brulee is a decidedly rich dessert. The main ingredient is heavy cream, though its fat content can be reduced to a degree by using half-and-half or ever milk for a portion of the total. Alternatively, go with full-fat cream and simply reduce the portion size -- and calories -- by using smaller ramekins. The custards are thickened by egg yolks and sometimes a whole egg, typically at least one yolk for every half-cup of cream. Ordinary granulated sugar, with its neutral flavor, is the traditional choice of sweetener. Classic creme brulee uses a vanilla bean for its flavoring, but you can use vanilla extract if you prefer. Preparing the Ingredients Most recipes for creme brulee follow the same basic pattern as almost any custard. Begin by heating the cream in a saucepan over moderate heat -- so the cream doesn't scorch to the bottom -- until it's steaming. If you're using a vanilla bean, split it and scrape the seeds into the cream, then drop in the pod as well. It takes just 10 to 15 minutes in the hot cream for its flavor to be extracted. While the vanilla is infusing, stir the egg yolks and sugar together. Don't whisk them, because you don't want froth. Tempering the Eggs The trickiest part of making a custard is combining the egg mixture with the hot cream. If you add the eggs to the cream, or if you pour cream too quickly into the eggs, the eggs will cook and you'll have a sweet, creamy omelet. The correct technique is to pour the first 1/3 of the cream into your eggs, stirring constantly to gently warm and dilute them. Once the cream and eggs are thoroughly combined, stir this mixture into the remaining heavy cream. The final custard mix should be a smooth, pale yellow, flecked with black vanilla seeds. Pour it through a fine strainer to remove the vanilla pod and any granules of cooked egg. If you're using vanilla extract, stir it in now. Baking the Custards At this point you can refrigerate or freeze the mixture for later use, or bake the custards immediately. If you're baking immediately, preheat your oven to 300 or 325 degrees Fahrenheit. Divide the custard between ceramic ramekins, 4 ounces or larger, and place the ramekins in a baking pan with a rim around the sides. The vanilla bean seeds tend to sink, so divide the last few tablespoons between ramekins so they'll all have reasonably equal quantities of seeds. Bring a kettle of water to a boil and set it on your stovetop. Slide the pan onto the oven's rack, then carefully pour the boiling water into your pan until it comes halfway up the sides of the ramekins. You might need to remove a ramekin to make space. Bake the custards until they're set but still jiggly in the middle, roughly 20 to 25 minutes with 4-ounce ramekins. The Final Stage The custards must be completely chilled to refrigerator temperature before you can give them their signature layer of caramelized sugar, so make them up at least three hours and preferably a day ahead of time. When dessert time rolls around, blot any surface moisture from the custards with a clean paper towel, then sprinkle them lightly with sugar. If you have a small gas kitchen torch, hold it 2 to 3 inches from the surface of the custard and wave it in gentle circles until the sugar melts, bubbles and browns. If you have no torch, put the custards back in their baking dish but this time surround them with ice water. Broil them for 2 to 4 minutes until the sugar caramelizes, then lift them from the pan and wipe them dry before serving. 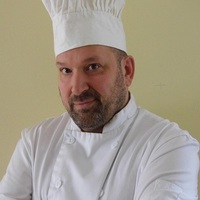 Fred is a trained chef and former restaurateur, living and working in Atlantic Canada. In earlier careers he worked in financial planning and technology retailing, and retains a strong interest in those areas. He has contributed well over 7,000 articles to online venues including Zack's, Opposing Views, Disney Family, Samsung.com, Livestrong and eHow, and the websites of The Nest, the Houston Chronicle, San Francisco Chronicle, Walgreen's and Kroger.

Ubuntu Linux is a popular alternative for users frustrated with mainstream operating systems. Its... Read More

The Top 10 Hottest Peppers In the World

You don&#39;t need a hazmat suit to try out the world&#39;s hottest peppers, but a healthy apprec... Read More