Girls Night Out - Saturday Night at the Speedway

Girls Night Out - Saturday night at the Speedway

So what if Trista Pankratz was lapped (twice) the first time she drove her race car at North Central Speedway. After 75 laps and a lesson on how to drive it, the next weekend she took second place in the feature race and hasn't looked back since. (Well, maybe once or twice to see how close the driver behind her is.)

Trista helps run the family's farm and works with rescue animals during the week. On Saturday nights she puts on a helmet, straps herself into a Sport Compact car and hits the dirt track south of town to put pedal to the metal. Racing is probably in her blood. Her grandmother, grandfather, and uncle were all racers. She drives the 95 car. That Lightning McQueen car out on the track? That's her dad.

Trista's brother was killed in an accident two years ago. She has formed a special bond with his daughter, six-year-old Viviane. "Since I started racing I've been glad that I can use it to show her you can be anything you want to be. She comes out every weekend and watches me race. Losing him might be why I started racing. We all realized dreams get cut short. It's something I've always wanted to do." Her husband, Shane, remembered that when he was searching Craig's List. "One day he said we were going to Bemidji. He took me to look at a race car. That was the push I needed to get started."

"It's pretty exciting," she says about racing, "A couple of weeks ago I had my car on its side. We're all coming into the corner and the spindle broke on another racer's, Brendon Yamry's, car. I thought, "Oh! I got him! See ya later Yamry! Next thing I know I was hanging upside down from my seat and thinking, 'What the heck just happened?' And then I come back down and I got hit from behind into the wall head on! Hitting the wall isn't as bad as it looks," she adds, "because you're strapped in and harnessed. But the next day you realize you tensed up, and you feel it."

A year and a half ago Trista started having severe head and body aches. She was diagnosis with MS and Fibromyalgia. "Most of the time, once I get up and start moving and get my mind is busy I'm okay." But some days she's bounced around at the track it can take her a day or more to recover.

She enjoys Kid's Night at the track and visiting local schools because the kids love to see the family's Lightning McQueen car. "Then I think, not only am I inspiring my six-year-old niece, but all of these other little girls, too. That's cool." Saturday nights at North Central mean a little family rivalry, too. "The night I won a feature race I was excited, honestly I was, but I was more excited that I whopped my dad!" She says laughing.

When she talks about the influence she can make in Viviane's life she gets excited, ""She's very special to me," "Sometimes I'm kind of hard on her but that's to keep her respectful. She's a good kid. She's a very big part of our lives. My dad says she reminds him of me when I was younger."

A trip to the junkyard to get a part for her vehicle started Heidi Keller's stock car racing career. "I just started talking to the owner and he said he had a Hornet racing car he was going to sell. He was looking for a driver." Her brother and neighbors had raced and she says she'd always wanted to do it, too.

After three years racing the smaller Hornet she was ready for more excitement. This past year she moved up to the Pure Stock division.

"I was a rookie again this year," she says laughing, but the change was a good one. "I like it. Actually, I love it. I'm in a bigger car. I go faster. There's more competition. I can do more with my car. I'm the only girl out there," she says of her new division. But that doesn't matter, "I would rather run with the boys," she laughs.

On Saturday nights Heidi races against her boyfriend, Devin Larson, and his father. When it's time to make repairs, they work side by side on their cars.

"I've had a few close calls," she says about racing at the track, "But honestly, I'm safer in that car than I am on the street. I have a harness and a roll cage. I would get hurt more going 60 mph on highway."

She hasn't limited her racing to North Central Speedway, either. She raced BAHA at Crow Wing County Fair and has won the Powder Puff event.

Heidi says she wouldn't trade her time at the track for anything. She set two lofty goals for herself the beginning of this past year: A top ten finish in the division and Rookie of the Year. That title will be decided at the speedway's banquet.

Heidi's has some advice for other females that are thinking about racing a stock car. "Do it." She says, "Go fast, turn left, have fun." 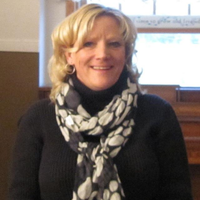 I have been a freelance writer for nearly 20 years. I worked for five years in the newsroom of a daily newspaper writing articles, features and columns. I currently contribute regularly to seven regional magazines on a variety of topics. I write on women's issues, parenting, homes, outdoors, Health, weddings, and many others. I am used to working under deadlines and understand the importance of meeting them. I am capable of doing research, writing the information and doing so in a timely manner while weeding out the information that is not needed yet making sure that the most important items are included in the finished product.

A Tale of a Sale