"Finally! A break!" Charlotte thought, as she lay back on her beach towel and dug her feet down into the warm sand. She loved vacationing in the Bahamas. She even had her own secret spot, where the ocean and a stream met, creating a lagoon scene. She let her eyes drift shut as the breeze threw a gentle spray of cool ocean water over her. She let her mind go blank and relaxation took over her body.

She opened her eyes slowly and lay there still, adjusting her eyes to the bright sun. The air was still, almost eerily so. She sat up, legs bent and arms extended behind her to hold herself up. She looked out over the gentle blue waves. She stood up and walked slowly into the surf. She sighed her relief as the waves splashed up against her tanned legs. As she walked farther into the sea, she heard a loud thump and turned around quickly. When she looked back, she saw her towel being slowly pulled into a bush near the lagoon.

"Hey! That's mine!" she shouted as she waded back through the water toward her disappearing belongings. She reached out and grabbed the end of her towel sticking out of the foliage and tugged swiftly. There was resistance on the other end, she dug her heels in the sand, pulling the towel and wrapping it around her hand as it slowly emerged from the bush.

"Ha! I got it now…..let go!" she yelled. She yanked the towel the last little bit, throwing herself to the ground. She stood up quickly when she saw what was attached to her towel. Standing before her, a huge pink flamingo. It had to be over six feet tall, peering down at her angrily. Now, she was no expert on birds, but she was pretty sure flamingos were not this enormous. . .or ornery.

The bird lunged at her, sinking his sharp beak into the soft flesh of her shoulder. She tried to shove him off as he wrapped his long, thin legs around her neck, muffling her screams. She spun around in circles, arms waving frantically as pink feathers flew all around. She swatted at the bird, only making contact with his soft feathers a handful of times. The bird let go of her shoulder, only to latch on to her wrist, gripping it tightly with his strong beak. She looked at her wrist, the bird's pink head was firmly attached, his intense black eyes staring back at her. She swung at the bird's head with her free hand, missing, her fist landing with a thud on her forearm. She screamed out in pain.

Finally, in desperation, she threw herself backward, smashing into the sun-bleached rocks. The bird released its grasp on her and screeched. He continued to screech out a high-pitched, blood-curdling sound so awful she could only cover her ears as she attempted to get to her feet. Her wrist gave out, unable to support her weight after the injuries from the bird's beak, and she fell back to the ground. She got to her knees and looked up. There was a sea of pink all around her. All she could see is thin legs and pink feathers, closing in on her. Each bird's dark eyes locked onto her.

She immediately dropped to her stomach and Army-crawled her way between one set of leg. She only made it past 2 birds when she felt a crippling pain on her leg, then the same pain in her other leg. She shoved her hands into the sand, hopelessly trying to keep herself from being dragged out. Suddenly, she was pulled backward, her abdomen dragging along the rough sand. She was flipped onto her back, again in the middle of what must have been thousands of the birds. She screamed as 4 large beaks came toward her, one clasping on each wrist and ankle, pinning her to the ground.

The crowd of flamingos grew larger still, squeaking and making the most awful sound. She tried to cover her ears, but the grasp on her wrists was too strong. Each time she attempted to raise her wrist from the ground, the bird would twist his beak slightly and tighten the hold on her. She let out a shrill scream and was met with even more noise from the colony as they circled in closer to her, standing all around her and peering down with those empty eyes. Suddenly, the group parted. She looked up and noticed all the birds around her, aside from the 4 still firmly holding her to the sand, were standing tall, their necks straight up with beaks pointing to the sky. All was silent for a beat. She heard, rather felt, a rhythmic thump moving closer to her. Like dominoes, the line of birds moved their necks straight to the ground in a fluid movement towards her as the thumping continued. A cool shadow moved over her as she strained to look down toward her feet.

She gasped at the sight of an enormous flamingo standing over her. She was sure the bird was over 10 feet tall with bright, neon pink feathers. All the other bird's feathers were a pale pink hue and looked soft to the touch. This bird, however, was very different. The feathers looked rough and sharp. His beak was black and shiny, almost robotic. The eyes were not empty like the other birds, instead they were intent and demonic. There was something very wrong here. She struggled with all she had to break free of the beaks that held her. With each struggle, the restraint became tighter. She was not affecting the birds at all, they continued to hold her effortlessly. She screamed out of fear, frustration, and hopelessness. 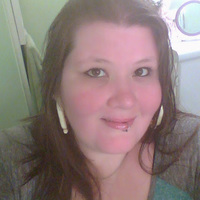 Words run through my veins!! I've loved writing since childhood. In 2010 I began writing fiction short stories and I published a short story in eBook format in 2011. I have been working as a freelance content author since 2012 for several companies. I am also currently working on several new stories.

**Day 1: I've got a Secret!** Several weeks ago I signed up on Yahoo! Contributors to receive a ... Read More