The 1990s: Memories of acid-washed, high-waisted jeans from Express, asymmetrical hair cuts, mood rings, and Cross Colors; films like John Singleton's 'Boyz N the Hood', Spike Lee's 'Malcolm X,' and Madonna's raucous documentary, 'Truth or Dare;' TV shows like 'A Different World,' which inspired so many of us to pursue undergraduate studies at HBCUs (whether we ultimately did or not), and 'In Living Color,' which served as an urban answer to NBC's 'SNL' and launched the careers of some of our favorite comedians and movie stars; and a political arena that brought both George H.W. Bush's Operation Desert Storm and Bill Clinton's Don't Ask, Don't Tell (not to mention the presidential sex scandal that nearly led to his impeachment). On our radios and Walkmans, music that ranged from Arrested Development to DJ Quik to Tupac to Digable Planets, from NWA to Public Enemy to Queen Latifah to Lil' Kim; from Smashing Pumpkins to Nirvana to Pearl Jam to En Vogue, from Janet Jackson to Mariah Carey to Whitney Houston to Hole. When I entered high school, most of us had no concept of this thing called the Internet (or, as it was more commonly known then, the World Wide Web); by the time I earned my undergrad degree, virtually everyone I knew had at least one email address and was beginning to download music (sometimes legally, often times not so much) from the web. It was a decade of rapid growth and extraordinary change, and the coming of age of my generation, Generation X. Rick Famuyiwa's new film, 'Dope,' which opened on June 19 (aka, Juneteenth), represents the perfect intersection of '90s nostalgia and 21st century realities and aspirations. Told through the eyes of Malcolm (Shameik Moore) and his two best friends, Diggy (Kiersey Clemons) and Jib (Tony Revolori)–a trio of "geeks" whose affinity for '90s hip-hop, slang, and fashion makes them perpetual targets for ridicule from their peers–the film follows this awesome threesome through a series of outrageous misadventures. Like most coming-of-age films, Dope weaves the common threads the genre is known for through its storyline: Teen romance and adolescent sexuality, "cool kids" versus "nerds," the stress of studying for the SAT and the social dilemmas that arise as senior prom nears. Where Dope diverges so gorgeously from the tried and true is in its treatment of its protagonist, Malcolm. Set in Inglewood, CA, Malcolm's story is an all-too familiar one: Young black male being raised by his single mother in an inner-city neighborhood overrun with drugs and gang violence, matriculating in an under-funded public high school where students must pass through metal detectors and drug-sniffing dogs are dispatched on a regular basis to search the premises. Against this backdrop, 'Dope' could easily pose as yet another cautionary tale (directed at whom, though?) of inner-city blues. But here, Malcolm is neither relegated to simply serving as the butt of the joke nor the teachable moment/statistic. On the contrary, Malcolm–and by extension, his buddies–is allowed to evolve into a full-fledged, unabashed hero. I won't spoil the movie for you by telling you how this happens, but I will say, his is the definition of the epic hero's journey, and his triumph is absolutely delicious. Where 'Dope' truly shines is in its ability to bridge two seemingly disparate groups–Gen X and Millennials. With the film's deliberate references to '90s hip-hop (the soundtrack features Black Sheep, A Tribe Called Quest, Luke) and unavoidable incorporation of today's most popular technology (BitCoin, dark internet, Find My iPhone), 'Dope' not only illuminates the elements which give each respective generation its unique identity, but also gives a nod to the ways in which the two intersect in our daily lives, often without us realizing it. Without painting either era as being superior to the other, 'Dope' makes it possible for those of us who grew up in the '90s to laugh, bob our heads, and relate to the characters on the screen while sitting next to the 20-somethings we used to babysit back in the day. The writing is sharp and brimming with wicked humor, yielding to some truly memorable scenes that play out almost like slapstick capers, and tender, poignant moments that manage to comes across as genuine with absolutely no trace of cheese. Malcolm, Diggy, and Jib are smart, funny, relatable characters, and the young actors who portray them turn in excellent performances. 'Dope' also features hip-hop artist A$AP Rocky as the neighborhood drug dealer, Dom; Zoë Kravitz as the not-so-round-the-way-girl, Nakia; and veteran stage and screen actor Roger Guenveur Smith as a neighborhood guy-turned Harvard grad and…ahem…entrepreneur, Austin Jacoby. The incomparable Kimberly Elise stars as Malcolm's mother, model Chanel Iman portrays Lily, and NBA star Rick Fox makes a cameo appearance as well. Forest Whitaker, Mimi Valdes, Sean Combs, and Pharrell Williams are some of the films co-executive producers, with Pharrell also delivering some tasty original songs (performed by our main characters' rock band, Awreeoh). Dope. –Rhonda Nicole 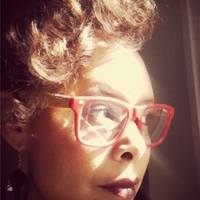