The Frankie Wop sandwich. [Photographs: Robyn Lee] While "DiSO's Italian Sandwich Society" might sound like just another trendy food truck name with no real meaning behind it, at this revived deli-on-wheels you get the idea that there might actually be a society involved. On their website you can see that there's actual history here—some cool very photos of the truck's different incarnations over the years, starting with an image of a cart on wooden wheels in 1927, then a modest truck displaying their four-digit phone number in 1939, then flanked by a couple of mobstery-looking guys in 1951, and so on. As of May, the truck is back and in action, run by the same family that started it way back when. Its location varies, but it tends to hit Midtown, the Flatiron, the Financial District, and beyond. All the meats and cheeses are sliced fresh to order right in the truck, which means you'll probably have to wait. But it also means that you'll be treated to the sandwich makers occasional calls of, "Who needs pro-JOOT? Anyone wants a taste of pro-joot?" at which point you can step up to the counter and grab a paper-thin curl of proscuitto to snack on. The menu is loaded with appealing sandwiches named after [real or imagined] Italian mobsters. We couldn't help but chuckle while reading about such amusing options as the "Tommy the Wig," and the "Vinny Chins." Considering the high caliber of the ingredients (the meats and cheeses are from Di Palo's, our favorite real-deal Italian dairy and charcuterie shop, and the areas they frequently park in, the prices are reasonable. The half heroes run from $6.50 to $8.00, and are almost large and brimming enough for a filling lunch on their own. Full-sized heroes run $9 to $11.50. The Tony Cheeks. We ordered four heroes on the "rustica" Italian bread, though they also offer focaccia, ciabatta, and whole wheat. The rustica is a far cry from your average squishy hero roll, but it's a matter of taste whether that's a good thing or not. Half of us loved the crispy-on-the-outside, soft-on-the-inside bread, which was dusted with flour and resembled a baguette, while the other longed for the softer bread more typical of Italian heroes. The vegetarian Tony Cheeks (Hero: $9, Half: $6.50) was our runaway favorite. We didn't miss the meat at all in this flavorful sandwich, which is packed with an amply salted pairing of two oft-screwed up vegetables: eggplant and broccoli rabe. The fried (but not breaded) eggplant was silky, sweet and devoid of bitterness, leaving the broccoli rabe to add a sight bitter kick. That kick was amplified by a layer of vinegary and hot pickled cherry peppers, and calmed down by a few thin slices of fresh, buttery provolone. The Jackie Nose. The Jackie Nose (Hero: $10, Half: $7) was another near-masterpiece. Mortadella isn't everyone's cup of tea, probably due to the presence of large white fat cubes, but this sandwich has the power to convert the skeptics. The bread comes heaped with featherweight sheets of mortadella, which gets its nutty flavor from pistachios and a hint of nutmeg. Fried eggplant and provolone up both the texture and flavor game, but it's the few leaves of fresh basil pressed into the pile that make this sandwich so good. The low point for many of us was the syrupy-sweet balsamic glaze, which overwhelmed the other ingredients rather than complement them. A more tart vinegar spread would have been perfect. The Don Vitone. We wish the Italian combo-esque Don Vitone (Hero: $11.50, Half: $8), with both proscuitto and sopressata, worked better than it did. The two meats competed for attention and almost canceled each other out. Di Palo's mozzarella was moist and full-flavored, though the sweet roasted peppers shone through as our favorite element. The menu claimed it would have tapenade, though it tasted more like the balsamic glaze. Salami proved to be a better player on its own in the The Frankie Wop (Hero: $10, Half: $7), especially in conjunction with the smoked mozzarella and hot cherry peppers. The sweetness of the balsamic glaze was not as noticeable against the powerhouse of salt, smoke, and spice going on here. For daily locations, check their Facebook or Twitter pages, and expect a line; sandwiches this good won't stay under the radar long. 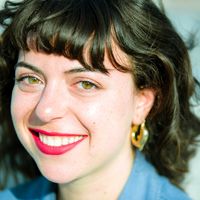 I'm a quick, savvy writer with an innate ability to turn out snappy copy and translate business concepts across numerous genres into readable, engaging posts. In addition to writing, I run PR at a fast-growing hardware/software startup, and specialize in writing on the following topics: tech startups, women in tech, marketing & PR, workplace happiness and productivity, retail and e-commerce, millennials in the workforce.

Customer Ratings: 16
Get Started With This Writer View Profile
Power your marketing with great writing. – Start your 30-day free trial today! GET STARTED

A Sandwich a Day: Calabreza at BarBossa

While this slender Brazilian cafe in Nolita probably won&#39;t make it into our regular lunch rot... Read More