If you didn't make it to the Village Voice's craft beer festival this year at the Brooklyn Expo Center in Greenpoint, you missed out on a fantastic day filled with unlimited beer tastings, liquor, music and the fantastic opportunity to meet some of these impressive brewers. Here's what you missed this year and why you should definitely secure your ticket for next year!

That's right unlimited, and with over 100 breweries in attendance, you'll be hard pressed to try all of them in the three hours you have there (nor would I recommend attempting). There are plenty of classic standbys, Sam Adams, Narragansett, Angry Orchard, there to showcase some of their known and lesser known brews. But there are also a whole slew of more obscure or completely unknown breweries just waiting to be discovered. Some of the particular stand outs from this year were Finback Brewery, (their Double Session was so good, it ran out), Lost Nation's Mosaic (currently only available on tap, but coming to stores near you soon! They also win coolest can design), and Alphabet City Brewing Company whose Alpha Male IPA is a surprising delight even if IPAs aren't normally your thing. There were some stand out ciders as well, which served a much needed palate cleanser between beers. Austin Eastciders delightfully tart Original Dry Cider which follows more in the vein of the English cider than the sweeter American cider you often find, and the Rekorderlig Cider from Australia which offered such interesting flavors such as Pear, Strawberry-Lime, Spice Apple and Passionfruit. The clear passionfruit cider was a surprise in every way. The beer is clear star of this show, it's why everyone was there and it doesn't disappoint, with so many different types, you're bound to discover something wonderful.

There's not only beer at the craft beer fest, Jameson and Aberlour were there with some of their finest cask matured Irish whiskey and Scotch, respectively. Aberlour had a range of ages of scotch and offered an interesting taste test between the light, fruity 12 year aged scotch to the strong all the way up to the smokey A'Bunadh (the Original in Gaelic). The A'Bunadh is a cask strength scotch, meaning that it was hand made the old fashioned way, without any of the modern processes. This scotch had a truly unique flavor, but isn't for the faint of heart. Prairie Spirits, an organic liquor company was also there, with three delicious cocktails to show off, the star being their cucumber vodka cocktail.

There's plenty of free swag to swipe at each booth, key chains, stickers, beer cozies, beer openers, even a tote bag. And the Village Voice's table had a spinning wheel where you could win any number of awesome prizes; the grand prize being a beer making kit. There was also free Kettle Chips, Kind bars, Zico coconut water, Poland Spring seltzer, and more. The VIPs walked away with a whole bag of mystery goodies.

If you sprung for the VIP ticket, you got access to the VIP lounge which had free food from The Gorbals, No. 7 North, and Grandaisy Bakery. There were also two special breweries reserved just for the VIPs, Sweetwater and Big Alice Brewing Company both of which had extremely unique, delicious options. One of the stand outs being the Hibiscus Goes-Uh from Big Alice which had a light fruity flavor without being too sweet. There was also a private outdoor area just for VIPs where you could look out on all of the revelry away from the major crowds.

There is also a fantastic outdoor area with a great view of Manhattan, food trucks, and games for a respite from all the beer tasting! The food trucks in attendance offered a range of classic New York food options such as Nunchas empanadas, to Coney Shack fish tacos to Papaya hot dogs to help soak up all of that delicious alcohol. And don't forget to visit the game zone where you can choose from cornhole, horseshoes or pong. If nothing else, the back patio was a beautiful place to watch the sun begin its descent over Manhattan after a successful day of tasting beer, cider, and liquor.

The Brooklyn Pour event was an absolute success, with three hours full of entertainment, food, and mostly importantly, delicious beer. The brews were all served up by people straight from the breweries who are passionate about what they do, and happy to spread some of that knowledge on. Who knows, you might even find a new favorite beer. 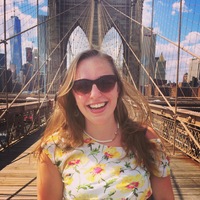 I studied writing at Sarah Lawrence College, currently based in NYC. I specialize in content marketing, social media, web content, short fiction, academic writing and blog posts. I love food, travel, theater, film, and cultural events. I have focused my writing samples on web content/blog style writing, but am happy to provide samples of creative or academic writing.

Customer Ratings: 111
Get Started With This Writer View Profile
Power your marketing with great writing. – Start your 30-day free trial today! GET STARTED

4 Ways to Save While Traveling

We all know that one of the biggest challenges to travel is trying to accomplish all you want to ... Read More

Pure Green is one of the newer in local chains to join in the juice craze sweeping New York. With... Read More

If you've never ventured to Prospect Heights in Brooklyn, New York, you're missing out on one of ... Read More