Bitcoin in a Nutshell: Your Must-Have Introductory Guide

Bitcoin in a Nutshell: Your Must-Have Introductory Guide

Bitcoin could win an award for being mentioned more times than almost any other word in the English language since its swashbuckling rise from $930 to almost $20,000 in late 2017. In fact, "blockchain" did win the award for Word of the Year in 2017 (we'll get to that one too). But let's start with the most important question... What the bleep is Bitcoin?

Bitcoin is a digital currency invented in 2009 by a person or group identifying themselves as "Satoshi Nakamoto" (we'll get to that juicy morsel). The one sentence explanation is Bitcoin uses encryption to manage the creation and verification of its units of currency, which operate without regulation from a centralized agency. Let's unpack that a bit.

In the aftermath of the crash of 2008, Bitcoin was designed to be a secure system of transactions that operated independently of the recently failed American banking system, or any centralized system. How does decentralizing transactions make them more secure? Imagine your bank gets hacked (not too hard, right?). The bank's records are wiped out, and there's no backup. There's no single place for recording transactions on Bitcoin. Everyone else on the block chain has a record, which brings us to... the blockchain.

Is Bitcoin the Same as Blockchain?

In a word, nope. But what is a blockchain? Okay, that gets more complicated, but we're going to tackle it anyway. Blockchain is the technology Bitcoin runs on (sort of like an iPhone runs on iOS). It's a series of blocks on what's designed to be an unbreakable chain. Each of these blocks represents a transaction, which becomes part of a chain that's visible to everyone. No one person can corrupt the data, since everyone else has a copy of it. In real world terms, if someone sent you a $1 million dollars of Bitcoin, everyone on the network would have a record of that transaction. It's the decentralization of data, this is why it's called a peer-to-peer (P2P) network.

What's the Big Mystery Behind the Inventor of Bitcoin?

Explaining Bitcoin is easier than explaining who invented Bitcoin. The truth is no one knows. What we do know is that someone or multiple people identifying themselves as "Satoshi Nakamoto" published a paper outlining the unit of currency in October 2008, which was entitled "Bitcoin: A Peer-to-Peer Electronic Cash System." There have been numerous failed attempts to uncover this international person of mystery, notably the Newsweek #epicfail. The person may never be unveiled, but it's unlikely anyone will ever stop looking for them. That person or persons likely holds about $5 billion dollars' worth of Bitcoin.

Once you do away with the central bank, how do you keep the network running independently? Reward people. People who "mine" Bitcoin are being given Bitcoin in exchange for helping to keep records of transactions on the network.

Where Do I Get Bitcoins?

You can get Bitcoin from mining, which helps keep Bitcoin running. More than 70% of Bitcoin has been mined in China over the last few years, but is in the process of banning all mining operations as of this writing. You can also buy Bitcoin on an exchange, like Coinbase.

No, Bitcoin is legal. (At least in the U.S., see China comment.) Although Bitcoin can be used for illegal purposes, it's not illegal. In a YouGov survey, 29% of Americans said they believed crypto currencies are used mostly for illegal transactions on the dark web. What's confusing is the difference between secure and anonymous. Bitcoin is secure, but it's not anonymous. Each transaction has an identifying fingerprint. The government can and does find people who use Bitcoin illegally, there are plenty of famous cases like Ross Ulbricht of Silk Road.

What Can I Buy with Bitcoin?

People have bought houses with Bitcoin, but you're probably not going to want to use it at Starbucks. Because each Bitcoin transaction has to be recorded on the network, it's a labor-intensive process. And it's not quick. It's not that you can't buy things with Bitcoin, it's that you probably wouldn't want to. Bitcoin's lack of ease to transfer is both a blessing and a curse. The labor- intensive blockchain makes it harder to hack. It also makes it harder to grab-n- go with a latte. New cryptocurrencies have spring up that are focused on making crypto transactions easy, like Ripple. 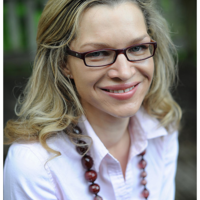 A native Midwesterner, Melissa is an award-winning copywriter and content strategist who combines creative experience from MTV Networks with SEO and digital marketing expertise from working for high tech companies and start-ups. Her focus is on creating effective search engine optimized content to acquire clients and increase sales. A certified Google AdWords professional and nut for WordPress, her work includes Intel, Atmel, Intuit QuickBooks, Milestone Internet Marketing, Pilot NYC, as well as content and search engine optimization services for a wide array of small businesses and law firms. Since 2005, she has written and optimized online content for more than 200 websites.

Are mobile rankings the new Yellow Pages for local businesses?

Is it time to revamp your website? Here are the signs.

# Is it time to revamp your website? Here are the signs. We could delve into the finer points o... Read More