Jeff was looking, impressed, at the gift his wife just gave him. The fact that Marjorie had bought him his dream car and that she did it on their wedding anniversary had got him absolutely by surprise. They'd already been married for twelve years and, since their first year, they always had the same celebration ritual: it all started when both called to their jobs saying they were sick, so they could spend the day together; they walk through Central Park; visited a lovely book store on Soho where each one bought a book for each other; went to lunch at a small italian restaurant and after that, they booked a suite at the Plaza Hotel where they would engage in their darkest desires. In the last few years Jeff and Marjorie reach an agreement that during those lusting sessions at the Plaza they could ask each other their most disturbing sexual fantasies, without veto power and without talking about what had happened that night never again. That was the place where Marjorie had dressed herself as a school girl with a plaid skirt or where Jeff was whipped. This year Jeff had a nun attire ready for his wife. They just came back from the book store and when they arrived at their street, Jeff saw a 67th Impala (like the one he wanted since high school) with a red bow on top of it. It was parked on their home door and, once she saw the face of her husband, Marjorie couldn't resist any more and gave him the keys. Jeff couldn't believe it. He spend the next hour steering the wheel around his block while he kept expressing his gratitude to his wife. The next step of their ritual was going to the italian restaurant, but before that Jeff wanted to bless the car with a quickie, as if they were sixteen, and even if that gave him a cramp, he couldn't be happier. He adored his wife for a long time and that gift, proof of her love for him, had left him without words. On their way to the restaurant Jeff and Marjorie held hands and once they arrived at the table they ate every year, he helped her sit, moving the chair for her. He felt like a gentleman. Marjorie ordered the same as every year: wild boar meat filled ravioli with nuts sauce, meanwhile Jeff asked for a foie and shrimp lasagna. Everything was going great, and for the first time in some time they talked about having kids, and for the first time Jeff didn't stress about it or tried to change the subject. That was unusual. Marjorie excused herself to go the bathroom and her husband followed her with a glance while sporting a dumb but loving smile. Not only did he loved her, but also she was the most beautiful women in the room. Jeff drank some water while he was watching a couple with kids on a near table. Marjorie's cell rang (it was a text message) and Jeff, without thinking about it and like it was a reflex, got it and read it. The message read: "I hope your husband liked the Impala. Are we still on for tomorrow? Bring the outfit I bought you". Jeff stopped smiling that instant. The message was from a son of a bitch called Lewis. Lewis… Lewis… where had he heard that name? It was someone he knew. He thought about it. And then he remembered. Lewis was a guy that worked with Marjorie. A character that her wife always despised. Someone who they almost fired many times because it was rumored that he was a kleptomaniac and stole office supplies. A despicable guy that had a 67th Impala. Jeff thought about the possibility that his new gift maybe had been Lewis car. Not only he'd been fucking his wife but he also had tarnished the other thing he loved the most. Marjorie was about to sit at the table, but before that she hugged Jeff from behind and kissed his cheek. He was still petrified and waited until his wife sat before asking anything. He didn't talk, he just extended his arm to show her the message. And that was it. Once his wife read the text, her facial expression changed: from a genuine smile to a painful grimace; even shameful. And before she could say anything, Jeff got up and left. He didn't want to see her again. Never. He started walking aimlessly while he was trying to understand how that had happened. He couldn't comprehend how, when, or why his wife had done that. And even if they were not in their best terms, that treason (Impala included) was disproportionated. Jeff got home and saw the Impala. Again. For a moment he thought about destroying it as a way to channel his fury but it wasn't the car's fault. He got a scarf and a thick coat from home and continued his way. He did something he used to do some time ago: he went to the newborn room at the nearest hospital and stayed there, looking at those babies while they were sleeping or crying on their first days on this world. As strange at it may sound, that was the place where Jeff could think more clearly. He remembered how he met Marjorie and the fact that it was her the one who came to talk to him. He also thought about the day he asked her to marry him more than twelve years ago, on that same italian restaurant where it had all ended today and he also recalled how nervous he was that day. 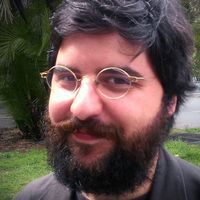 The umbrellas of Cherbourg

The Umbrellas of Cherbourg is a french movie directed by Jaques Demy in 1964 that is very strange... Read More