"She tried to remember what it was she was thinking about before she heard the news of the volcano's eruption. Oh yes. The menu. Her train of happy thoughts about the romantic menu she would pick for Joshua's birthday was disrupted when the announcer at the airport broke the news of a volcano eruption in Indonesia. The bad news was that she would have to stay stranded at Melbourne airport for – God knows – how many hours until the next available flight back home and to Joshua. She pictured him sitting in his much-loved cosy reading corner in the home she once used to live alone, reading books and soaking up the knowledge of the world, getting lost and found – yes, so immeasurably found between the lines of his books – was something that blew her away.

Was this guy real? A translator in her house? That was more than she could ask for. She kept recalling how reluctant she was to attend that book fair last year. She was lucky to have a friend like Katie who insisted that she went there. Katie was exactly the opposite of Eva. Katie was extrovert, playful, charming, seductive. Eva was always hiding in some corner behind a cup of coffee and a laptop. No wonder why Joshua found his perfect soul mate in Eva. Eva provided a sense of security that many girls lacked. It was to Joshua's delight that Eva lived in the Netherlands. He was infatuated with Dutch painting and he longed to visit the country where Vermeer was born. But besides a passion for Vermeer and the Golden age of Dutch art, he longed to relocate. It all happened very fast. He left his Texan apartment and moved in with Eva almost about one month after they met at the book fair. For Joshua, Eva was his way of finding a mirror of himself without feeling the burden of anxiety and emotional insecurity that attention-seeking girls impart.

And then a volcano erupted and she found herself talking to an old lady at the airport. That woman was a bit bizarre but she apparently saw a lot of things in her life. You could tell there was something unsettling about her but Eva wanted to listen. She always paid attention to the unusual things that people ignored and passed by or even frowned upon. The words she spoke made her heart quiver.

"You hardly know this guy."

As she approached the information desk, she saw the old lady go towards the corridor right where the coffee shops were. A few minutes later, there was no sign of her.

The girl at the desk said she had no news. Eva went back to her seat and opened her laptop. She checked her emails but she kept thinking of that lady. She wanted to go find her but she faltered.

Airports always gave her a sense of insecurity anyway. And then it struck her. "Avocados". Joshua's favorite. An avocado based recipe for Joshua's birthday.

All she needed was a surprise. That was it. Everything was okay. Except being stranded at the airport of course. 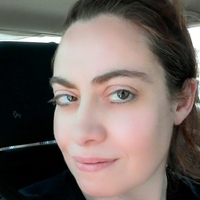 Magda writes about Italy, travel, living as an expat, self development, food, nutrition and general marketing copy for brands in the creative industries.

Customer Ratings: 6
Get Started With This Writer View Profile
Power your marketing with great writing. – Start your 30-day free trial today! GET STARTED

The Bear and the Baby

I am not exactly a fan of cartoons. But I have learned to embrace them. I run a freelance busi... Read More

It's funny how a pair of shoes – yes, shoes – can bring back to mind a whole chapter of your life... Read More