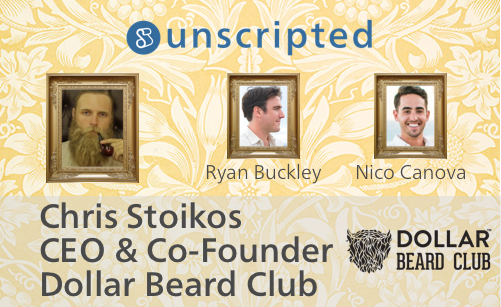 
Chris Stoikos, CEO and co-founder of Dollar Beard Club, is an influential and successful entrepreneur, and has plenty of insights to share with the Scripted audience. He's not your typical entrepreneur. He's not afraid to speak his mind, push the limits, and take some unorthodox but high-performing approaches to marketing. He lives by his own code. Stoikos joined Scripted for a podcast from deep in the Canadian wilderness, and this is what we learned.

Stoikos describes his journey as a "pretty crazy path": He started his first business when he was only 18 years old. He later sold that business and moved to California where he ended up opening a restaurant, then selling it, and going into business with a partner.

Stoikos has done it all, from selling a golfing product, a wearable piece of Bluetooth technology, and a toolbox featured on Shark Tank to creating software. Eventually, he founded Dollar Beard Club, which he runs today. Some of his ventures failed or were sold off, but as an entrepreneur, it's about experimenting and trying again.

Along his journey, Stoikos has traveled around the world seeing where the current takes him and never saying no.

500 Startups is an incubator and accelerator ran by people with large networks and plenty of business experience. Stoikos and Ryan Buckley, CEO and co-founder of Scripted, actually met there. Stoikos says that the people at 500 Startups help show you the path so you don't have to carve it out on your own, and Stoikos' Dollar Beard Club has already benefited from their tools, connections and insights.

Stoikos' first business got its start when his Xbox broke. Instead of tossing it, he learned how to fix it himself. Once he learned how to do it, he began advertising his repair services on Craigslist, built up his business, and opened up a little store. He has brought that same mentality into every business he has started. He's always naturally looking for a solution to a problem, and he creates opportunities in the process.

His Approach to Business

Unlike many of his businesses, Dollar Beard Club was about getting the right financial structures in place and putting together an awesome team. For example, that means his pitch deck was finished before he launched instead of a year after.

However, Stoikos didn't always take such a polished approach to entrepreneurship. His mindset was to just roll with it. He ruined his credit at one point and had bills stacking up. But he just kept going forward.

What "Fake Until You Make It" Means to Stoikos

His philosophy has always been "fake it until you make it" and appearing bigger than you are: believe you've made it before you've even made it. Stoikos refuses to "sugarcoat" the reality of entrepreneurship, and says that not every entrepreneur will make it. Instead, you have to be willing to fail, get back up, and never take no for an answer. Stoikos says you have to be confident in order to "run with champions."

How Stoikos Has Succeeded With Video

Stoikos has used video to dramatic effect for his Dollar Beard Club marketing strategy. He is currently throwing an event in Hollywood known as Unconscious Content. It's about tapping into the subconscious mind and removing the constraints society places on you in order to go into what Stoikos describes as your "creative land." This event will show how to make the type of videos Stoikos is famous for.

Stoikos scripts most of his videos himself, but recently has brought on some other talent to help him make them as well. He stresses that making videos is not as hard as people think. He had zero experience making video when he first started, but simply found inspiration from videos he liked.

After four to five years of practice, Stoikos just wants to share want he has learned. At the most basic level, just surround yourself with like-minded people and start shooting. Then do it again until it's right.

Finding Your Own Creativity

If you're searching for a creative boost, there are a lot of ways to do it. Stoikos does a two-day fast at times, which puts his mind into an ultra-creative state. The thoughts that come through his mind during these fasting periods are equal parts funny and scary, but he picks what creative flashes to use in his own life. Stoikos believes everyone has this ability, and all the working parts are there to make it happen.

What Is the Beard Brotherhood?

The Dollar Beard Club features the "Beard Brotherhood." Stoikos says the appeal of the beard is that you don't need to do anything to have a beard. He describes the resurgence of the beard as a return to our primal origins and instincts. Most men don't have beards because of societal constraints, but it takes a significant amount of time every year to shave. Beards are for people who just want to get up and go.

When you pass a bearded guy on the street, you feel like you're in a brotherhood. With his company earning over $10 million in revenue and 180,000 members, there's a lot of "bearded dudes" out there who belong to the brotherhood. It doesn't matter if you have 10 hairs or 10,000 hairs, a beard shows you're not going to be confined by the rules of society.

How Did Stoikos Develop His Brand?

Stoikos believes everyone wants to belong to something bigger than themselves, and he feels the same way. Building a brand is about energizing people and giving them meaning. He believes you need to focus on listening to your customer, look at everybody as equal, and focus on small budgets for a successful brand strategy.

How Stoikos Takes Care of Himself

Stoikos tries to maintain a solid sleep regimen, trying to maintain his circadian rhythm, but travel can make that difficult. He also tries to avoid using the computer two hours before he goes to sleep to allow his brain to calm down. Stoikos also fasts almost 16 hours every day.

At Dollar Beard Club, he lets his staff do their thing, such as letting people nap in the middle day, because each body is different.

How Does Stoikos Say No?

Stoikos isn't good at saying no, and that's just the way he is. He believes if some part of you is burning to say yes, then do it. If your gut says no, then don't do it. In general, he says yes to a lot more things because he takes care of himself and has the energy to take on a lot.

Stoikos is an entrepreneur with deep insights and he's ready to share them. Scripted looks forward to inviting him back to future podcasts.