How to Focus Your Writing 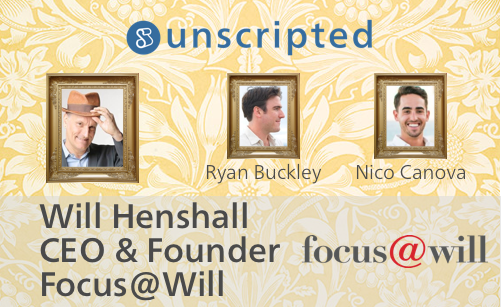 
Will Henshall, CEO and founder of Focus@Will, spoke with Scripted as a part of Scripted's first podcast geared solely to writers. Henshall's Focus@Will provides music designed with science in mind to help writers and other professionals find their focus, cut distractions and increase productivity. Henshall talked about not only how his software works, but also the tech scene in LA and his own experience with music.

Henshall was recently at 500 Startups where he met Ryan Buckley, co-founder of Scripted. Henshall describes 500 Startups as a venture capital firm started by Dave McClure that invests in both early-stage companies and companies that are profitable, acting as both an incubator and accelerator. 500 Startups invested in Focus@Will, and Hanshall attended its "growth dojo." It's a three-month long process, and Henshall says it's a lot like taking a two-year MBA, but all the coursework is on your own company, and you finish it in six weeks.

Henshall's Take on the Tech Scene in Los Angeles

Henshall says he's very connected to the large and vibrant tech scene in LA. Hollywood has always been the center of the world's media production, and LA-based tech companies such as Snapchat reflect that tradition. Henshall says there is actually more startup angel money in LA than in San Francisco at the moment. Another big factor in LA's favor is that it's much more affordable than the Bay Area.

Henshall Was Literally a Rock Star

Focus@Will uses music to help writers and others focus and stay more productive. So it's no surprise that Henshall has a background in music. He actually came to LA in the 80s as a member of the band Londonbeat, which was signed to MCA Records. The band produced a number of hits, including "I've Been Thinking About You," which Henshall wrote.

Focus@Will is a tool designed by a world-class team of doctors, technologists and music producers to help you focus at work. It's music uniquely engineered for each person's brain type. Paying attention at work is more and more difficult and leads to billions in waste each year. In fact, Salary.com found two-thirds of employees report wasting at least an hour of day. That's six and half weeks of each year that's being wasted.

Henshall says almost a million people have used Focus@Will, with about 40 percent of subscribers logging in at least three times a week for four to five hours and an 80 percent retention rate of paying customers.

About half the platform's users are creative writers of one type or another, and many find it useful for writer's block.

Henshall was interested in the different ways music works on the brain. When he wrote "I've Been Thinking About You," it was one of the most successful songs of 1991 and 1992. The song's popularity made him very interested in why that song out of the 500 or 600 songs he had written was such a hit. This led him to consider the science of music.

He helped build five tech startups since his days in the band, and when his companies Rocket Network and DigiDelivery were bought by Avid in 2003, he was tasked with integrating his technology into Avid's company. Henshall noticed he wasn't as productive in Avid's open office setting and became easily distracted. Employees there put on headphones to listen to music, but Henshall noticed a problem: Music that moves and engages you leaves you more distracted, and that's the music people tend to listen to.

This observation led him to create Focus@Will for music that actually helps you be more productive.

Why Does Focus@Will Work?

Henshall provided an example of our caveman ancestors to explain how Focus@Will works. Everybody's brain is designed for fight or flight, particularly in the limbic system, which is constantly monitoring our physical safety. If we imagine ourselves in a cave and painting, our eyes are focused on the task at hand, which means our ears are responsible for listening for threats from the jungle or forest.

Researchers have found that not much has changed. Your mind often cannot fully get into the creative "flow state" unless you are sure there is no threat in your surroundings. Focus@Will is designed to manage the impulses of the primitive brain, or limbic system, with music designed to help you create and sustain your flow state.

Henshall says it works for two out of three people who try it.

How Do People React?

Everyone is different. One of the most popular music channels plays up-tempo electronica, but every single track has been engineered to help people focus based on the way their brains are wired. None of the songs have vocals because vocals are distracting, explains Henshall. However, it's not simply instrumental music either: The instruments sound like voices.

For people who suffer from adult ADD, Henshall says that channels with fast beats and up-tempo music actually have the paradoxical effect of calming people with ADHD down so they can focus on their work.

Henshall was a great guest for Scripted's writers looking to be more productive. Writers who sign up for Focus@Will here will receive two months of free service.