Tips for Growth Hacking the Success of Your Marketplace 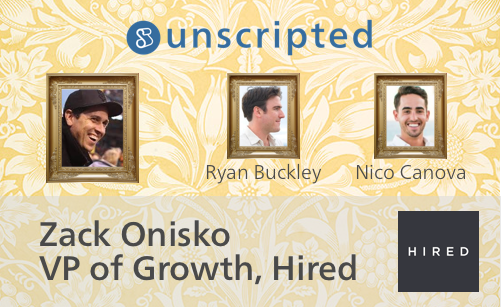 Zack Onisko, Vice President of Growth at Hired, has a long and rich history of bringing his expertise, creativity and strategic thinking to drive startup success. He joined Ryan Buckley and Nico Canova to talk about his experience in the world of startups, what kind of tools and strategies are most effective for growth hacking, and even how to maintain a work-life balance when the pressure is on.

An Entrepreneur From the Beginning

Onisko got his start in tech early. After leaving high school at 17, he went to college and fell in love with design and Flash. He left to start freelancing full-time but eventually came back to finish his design degree. At that point in his life, he had visions of working at a design agency, winning awards and doing amazing work.

At the beginning of his journey, he found himself at Tickle, where he was hired as a designer on their marketing team. Tickle was an early innovator in using paid marketing as a full-force channel, and provided a wide variety of online tests created by PhDs that were popular across the web. At the company's peak, Onisko said that every dollar they spent turned into two dollars for the company, and the company was the top advertiser for sites like Yahoo, The New York Times and many other big channels.

Although the company was acquired by Monster.com in 2004 for $100 million, it produced plenty of alumni, such as Michael Birch, who went on to found companies like Bebo, along with others who became major players in tech giants, like Facebook and Amazon.

Onisko drew on his experiences at Tickle and used them to fuel his own career. Since then, he has gone on to help found startups like BranchOut and Superfan, and served as the Chief Growth Office at companies like CreativeMarket.

At Hired, Onisko is responsible for diversifying acquisition channels and building their strategy on top of paid marketing. To do this, he relies on content marketing, SEO, referrals and partnership programs. He is also in charge of improving the user experience on both sides of the funnel.

In addition, a big part of his job is explaining what Hired does and what it offers, which means selling trust, value and product differentiation. Currently, his team is working on how to rapidly onboard jobseekers, which means gathering more data with less form fields, which helps reduce the friction involved with signing up for Hired's service.

On the backend, he's also focused on attribution, analytics and business intelligence. Onisko notes that, for Hired, there are two funnels, both B2C and B2B, and each requires very different marketing tactics for his overall growth hacking strategy.

Success Through a Growth Stack

Onisko shared some of his growth stack with Scripted as well. For analytics, he uses Redshift and Looker; for e-mail, he uses Customer.io; for SEO, he is using Conductor and for content marketing, he uses Hootsuite, Sprout Social and Scripted.

As Hired focuses more on content marketing, Scripted will be an important part of Hired's strategy to drive growth and generate interest from readers across the web.

Onisko said that young cash-strapped startups should generally avoid using paid channels. In other words, don't dump your money and hope for the best when you're dealing with very competitive channels. In those situations, high volume is needed to scale up, which can get expensive very quickly.

At the same time, Onisko does think there are a few interesting channels in the paid realm, such as native opportunities where you can really target your audience. For example, you can get clever with Facebook ads if you really know your audience and can create interactive content that will engage their interest.

Onisko also explored the importance of work-life balance. He is a father, and it's important for him to be home for his kids to put them to bed. Onisko manages 15 people and realizes that you have to let go of the things that don't matter and learn to delegate. If you're too reactionary to every e-mail and non-critical task, you'll basically never sleep and probably end up burnt out.

Onisko has only been at Hired for about five months, but it's likely that his future with the company will lead to explosive growth, just as it has for many other innovative companies that he has helped nurture across the startup world.