When the best leader's work is done the people say "We did it ourselves!" 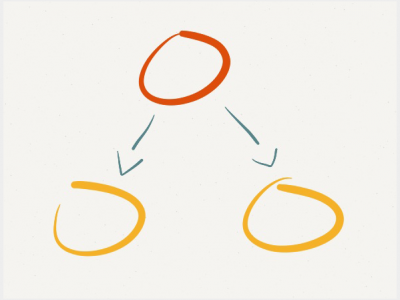 The green arrows represent the fact that the red circle tells the yellow circles what to do. There are a couple of fundamental flaws in this model.

For starters, the only immutable law of hiring is: "hire people smarter than you". So if the red circle has done its job, then the yellow circles are smarter. A sure sign of a toxic and broken work environment is people taking directions from people who are less intelligent than themselves. Assuming that the immutable law has not been broken, the smartest people in the company are the bottom row; the foundation. It is natural for them to set the direction of the company.

Secondly, anyone who has been assigned a great book for summer reading knows: exciting intellectual endeavors become much less exciting when someone else tells you to do them. Motivation is an elusive beast, but it's safe to assume that people are most motivated to tackle problems that they themselves have identified. You wouldn't want to share a desk with someone assigned to your office by an authoritarian governing body, would you? Even if it was the most beautiful desk in the building, your new desk-mate probably wouldn't be thrilled.

Lastly, only the bottom row is actually doing real work. Everyone else is just [insert corporate buzzword].

So how do we fix this model?

I used to run an outdoor leadership program for teenagers. One of the most important lessons, imparted on our students by my friend and co-instructor Dave, highlighted the value of passive leaders. In the camping context, the passive leader is the one who, upon reaching camp at the end of a long day, sets up the group tent and stove. While her peers are skipping stones in a nearby river, she is selflessly preparing dinner. She leads by example. She would never ask her friends to burden the responsibilities, because she perceives herself to be their peer. In actuality she is their leader.

Discussing instead of Assigning

The most inspiring leaders discuss with characteristic enthusiasm the challenges and projects they've experienced. They rally their peers around those projects not because they're power-hungry, but because motivating others is in their DNA. When they interview prospective team members, their excitement about those projects is palpable, infecting the best candidates with a similar, ideally tangential, excitement.

Reporting instead of Managing

What happens when a passive leader is identified by the powers that be, and asked to "manage" their peers? At first, this might sound like the aforementioned broken model. The most creative and productive people are self-managers, even if they're not passive leaders themselves. They certainly do not need someone telling them what to do, so what is the role of their newfound "manager"? Reporting. In this model, managers become liaisons up the pyramid. At each level they ensure thread safety, alerting distributed teams of overlapping or replicate projects. It is a subtle distinction, because the model still seems hierarchical. But the devil is in the details. By framing this role as one of a reporter, announcing the direction and progress of their team, we've alleviated the first two problems: the foundation is self-assigning projects and setting company direction. And because asking people "What are you up to?" is far less time-consuming than inventing and assigning projects, the reporter has time to do real work.

Git as a Metaphor

Sometimes, seemingly trivial details set the tone for the bigger picture. There are two ways to think about a team of engineers maintaining a codebase. The first is push: engineers push ideas to the collection. The second is pull: engineers have ideas and ask the team to pull those ideas in. I'm experimenting with both approaches, but I think I'll settle on the latter because it seems somehow more consistent with all the values outlined above. The push approach is reminiscent of the conventional model, with the manager saying "You do this, and then give it back to me". While the pull approach feels more like a group discussion, with any employee asking "What do you think of this?"

What do you think of this? Does the metaphor hold?
Published by Jacob Kring on Thursday, May 10, 2012 in Development, Staff.