An estimated one in ten adults get their news from Twitter, according to a new report. Is your business tweeting at optimal hours to reach a valuable audience?

See also: How to Use Scripted's Scheduler for Twitter (Our awesome scheduler will pre-time and write tweets for you!)

An ongoing debate in social media marketing has evolved around one question: How often should a company tweet? According to a data report from Sales Force Marketing Cloud, 77 percent of marketers say that Twitter is an important part of their social media strategy. Undoubtedly, this is because Twitter boasts 140 million active users who produce 340 million tweets everyday; making sure that your company has a successful presence in the "Twitterverse" requires more than crafting clever tweets. Marketing studies reveal that the science of Twitter success is determined by what you tweet, how you tweet, when you tweet, and how often you tweet -- so exactly how often is that?


Before deciding how often to tweet, there are several things you have to get right to reach maximum impact on Twitter. Here are some pointers to help you get the best results on Twitter:


When it comes to Twitter, most businesses tend to slack off on the weekend: wrong move. In general, engagement increases 17 percent on the weekend, according to the Sales Force study. For the entertainment and publishing industries, weekend engagement increases by 23 and 29 percent respectively. In addition, tweets that are posted during business hours are most effective. Engagement is highest from 8 AM to 7PM.

Here at Scripted, we took a look at our own Twitter stats and it's pretty in sync with what the study shows. 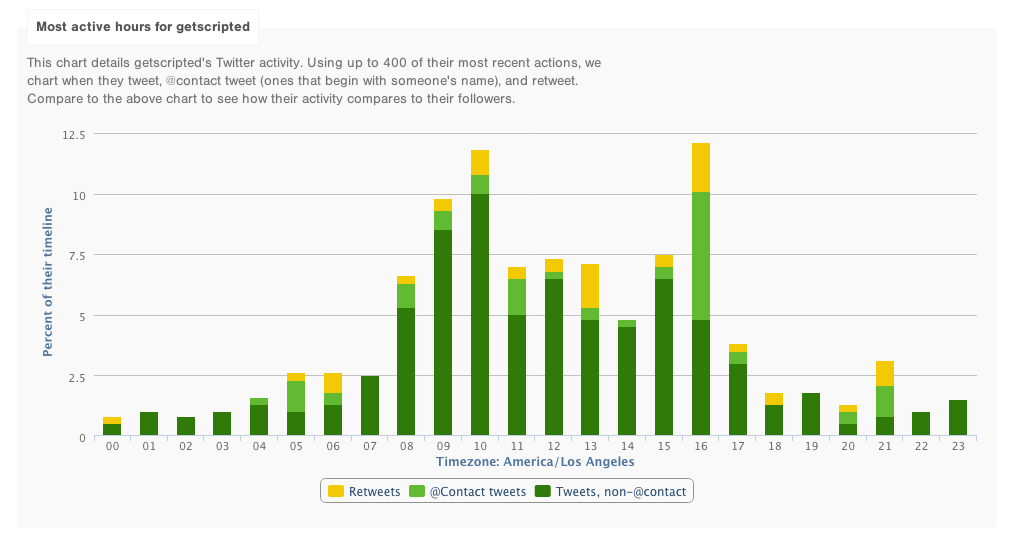 
Not all tweets are created equal. How tweets are structured influences engagement. The factors that determine how far your tweets go depend upon several parameters: length, links, hashtags, request for retweets, and pictures. Here's how these factors influence tweet engagement:


According to Forbes, some of the most successful brands on Twitter are: NASA, Walt Disney, and MTV. NASA used a very creative Twitter strategy when it targeted Justin Bieber's female fans who might be interested in STEM (science, technology, engineering, and math).

How Much Is Too Much?


So, after you've adjusted the length, added a link and hashtags, attached a picture, asked for a retweet and are poised for when and what time to tweet, you might be wondering how often you should release your well-honed missives. Opinions vary for how often you should tweet. New Media Force recommends two per hour for peak hours, and one per hour for non-peak hours. Sales Force Marketing Cloud is less generous. Their study says that the window for the optimal number of daily tweets is actually quite narrow. If you tweet more than four times per day, your tweets will become less engaging. It seems the Twitterverse might have a point of diminishing returns. Between the two extremes there is a lot of room for experimentation. The best token of advice is to establish your best days and times, and find the number that is best for your company and your audience.